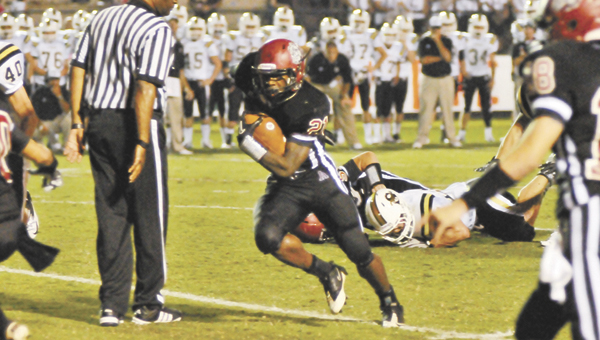 AHS travels to face Monroe County to start Class 4A, Region 1 play after a week where the Bulldogs managed to put 12 points on the board against rival Straughn. AHS ended up winning the game, 12-6.

Seymore said a lot of credit goes to Straughn’s defense.

“We’ve got to find the means to put some more points on the board, and put more pressure off of our defense,” the coach said. “I think that’s key for this week.”

Monroe County fell behind early in its season opener, but eventually fell 34-20 to Class 2A Flomaton.

Seymore said MCHS quarterback Tytus Howard is the go-to guy on offense for the Tigers. Howard sits at 6-foot-4 and 225 pounds, and is a versatile athlete who is more of a runner.

“He’s a big kid,” Seymore said. “Defensively, we’ve got to keep him under wraps. Last week, (Straughn’s) Rollin Kinsaul got out of the pocket a couple of times and hurt us with his arm. We had pressure, but he adjusted to the pressure and broke through a couple of tackles.

“This kid (Howard), he’s an actaul bigger version (of Kinsaul) and very strong,” he said. “Offensively, they’re very similar to us. They run spread, option-oriented plays revolving around (Howard).”

In order to be more effective offensively, Seymore said he’s looking to provide more equality on the run and pass this week.

The biggest improvement for Andalusia from week one in Seymore’s eyes, has been the team’s urgency.

Straughn drove the length of the field and almost scored a game-winning touchdown with less than 14.6 seconds left in the game.

However, the Bulldogs sniffed out the play and managed to squeeze out an interception to ice the game for the win.

Seymore said the players understand the importance of finishing drives early and the magnitude of tonight’s game.

“We’re looking for a big road win,” he said. “Thats how you make the playoffs. There’s no such thing as a down week in region play.

“After (Thursday night), half the teams in the region will either be 1-0 or 0-1,” he said. “When you’re 0-1, it’s more of a battle to get those top four spots. I think it’s a must (to win). If not, then it’s an up hill battle after that. I think our kids understand the magnitude of the game. This is what puts you in the playoffs and earns you extra games at the end of the year.”

Kick off tonight in Monroeville is at 7.

Florala will be setting its sights on Geneva County’s TJ Green and Nick Carroll tonight as the Wildcats host the... read more