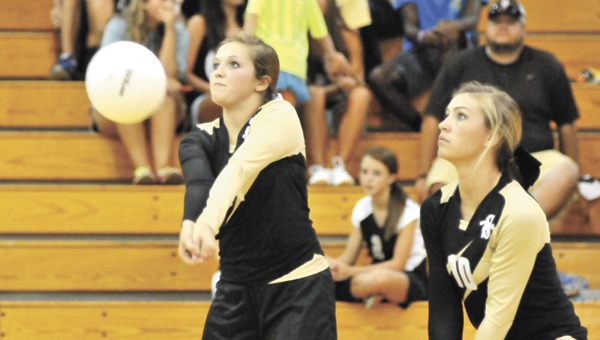 Straughn’s Emily Hammett (left) and Jacie Williamson go for the volleyball Thursday night. The Lady Tigers bounced back from a 13-21 deficit in the second set and went on to sweep Excel. | Andrew Garner/Star-News

Straughn’s Lady Tigers didn’t seem to be bothered by a line up change at the start of its second set Thursday night.

In fact, the Lady Tigers played like there wasn’t a change at all.

In the second set, SHS coach Daniel Rodgers — who is in his first year as the Lady Tigers’ volleyball coach — made a line up mistake, which was fixed after he called a timeout with his team trailing 2-3.

From there, the set got back into action.

Later in the same set, one of Straughn’s two setters — Katelyn Kinsaul — had to come out of the match after teammate Paige Taylor landed on her a little funny after a lost point.

Emily Hammett had to take charge of the setting duties and with her team’s help on making volleys, prolonging rallies and a strong service game, the Lady Tigers prevailed in the end.

“The girls got heart,” Rogers said. “They played well. I can’t speak enough of the girls’ character. They’re team players. They leave it all on the floor.”

Soon after Kinsaul left the match, the Lady Tigers had their big deficit erased, thanks to Jacie Williamson’s service game.

SHS went on a 10-0 run thanks to Williamson’s serving and the resilient effort each girl showed on the floor.

At the tail end of the second set, Excel made things interesting by prolonging it with answerable volleys.

Earlier in the match, Straughn took a 4-1 lead in the first set thanks to a Williamson kill. From there, the Lady Panthers didn’t have a good counter, especially with Hammett at serve later in the set.

Kinsaul later returned for the final set, where Lady Tigers trailed early, but bounced back at the mid-way point to take a 15-7 lead they’d never give up.

Never giving up was a big key in last night’s win, Rodgers said.

“It was a big area win,” the coach said. “It’s good to be undefeated in the area. It sets up a big area match with Opp next week. We’re just going to try to get better every game.”

With this victory, Straughn improves to 3-0 overall, and 1-0 in Class 3A, Area 2. The Lady Tigers play next on Monday at Brantley.

SHS, Neal to square off