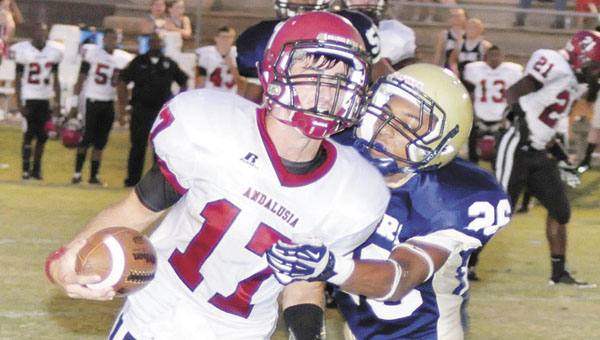 The Bulldogs scored early in the first half, going up 6-0 on a 10-yard touchdown run from Derrick Dorsey 30 seconds into the game. Penalties pushed Andalusia back 10 yards on the point after attempt, and the two-point conversion failed.

The defense forced MCHS to punt on their ensuing possession, and they drove the Tigers to their 10 before turning the ball over on downs.

Monroe ended up punting again and two plays later, Andalusia put the ball on the ground and the Tigers recovered.

The Bulldog defense held MCHS to a three-and-out as the first quarter came to a close.

Just 15 seconds later, the Bulldogs found the end zone again when AHS senior quarterback Michael McCalman scampered in from two yards out. The PAT was good to make it 13-0.

MCHS drove to the Bulldog 26, and fumbled the ball on fourth and inches. Andalusia went on to march down the field and make it 20-0 on a Devonte Jackson 16-yard dash.

The teams swapped possessions, and MCHS got on board with a 65-yard punt return. The Bulldogs blocked the point after to keep it 20-6.

Another long drive put Andalusia went up 27-6 on a 16-yard pass to Jackson.

The Tigers scored on an 18-yard pass with 7.4 seconds left in the first half. The two-point conversion made it 27-14 at the half.

Monroe got the ball to start the second half, and put together a 61-yard, seven minute drive that stalled on the four yard line.

Andalusia started from there with just over five minutes in the third quarter.

On the first play from the 4-yard line, McCalman scrambled to the Monroe 34 and a 15-yard penalty put the Bulldogs on the 19.

Dorsey rushed 127 yards on nine carries and had two touchdowns.

Andalusia’s back in action next week against Hillcrest-Evergreen for its homecoming.