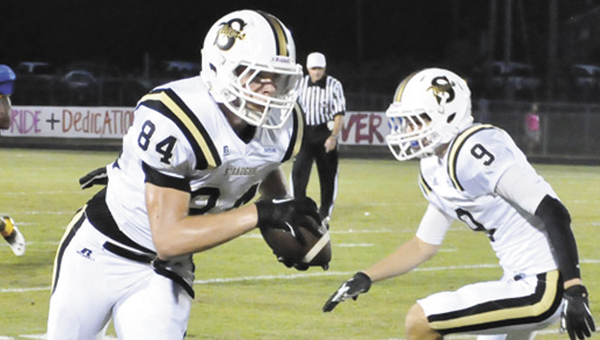 Leading 6-0 at the half, ninth-ranked Straughn scored 15 points in the third quarter and went on to beat W.S. Neal 21-8 for a region win in East Brewton.

“It was a tough ball game,” Straughn head coach Trent Taylor said. “It always is when we play (W.S.) Neal. We have played when they were really good and we were really bad and we have played when they were down and we were good and it was close. I think you have two pretty good football teams. Two teams that this early in the year are still trying to find their way.”

While neither team scored in the first quarter, both had early chances in the second quarter to put the ball in the end zone. Defenses from both teams stepped up to keep the game scoreless with 3:20 left in the first half.

In the second quarter, with Straughn driving the ball at their own 23-yard line, W.S. Neal quarterback Malcolm Hawthorne suffered an injury while playing defense that stopped the game for roughly 20 minutes. Hawthorne would be carted off the field on a stretcher and taken to the hospital.

After the delay, Straughn would be the first team to put points on the board as Devin Scott scored on a 3-yard run to put the Tigers up 6-0 after a failed 2-point conversion. Straughn would hold the 6-0 lead at the half.

That stoppage of play and losing Hawthorne was the key in the game to W.S. Neal head coach Doug Hoehn.

“Both teams played really hard and both teams played with a lot of class,” W.S. Neal head coach Doug Hoehn said. “It is fourth down on the 2-yard line and we didn’t get in when it was 0-0.”

In the second half, Scott would get back to work for the Tigers as he gave Straughn a 12-0 lead with 8:16 left in the quarter on an 11-yard TD rush. SHS got the 2-point conversion to take a 14-0 lead.

With 5:54 left in the quarter, Straughn quarterback Rollin Kinsaul would hook up with Brice Scott for a 25-yard touchdown pass to put the Tigers up 21-0.

Zack Haveard would get the final score of the night and the only score for the Eagles as he romped 12 yards for a score with 1:08 left in the third quarter.

Neither team would score in the fourth quarter.

Taylor thought the depth of his team played a part in his team’s win Friday.

“I think probably numbers was the difference in the game tonight,” Taylor said. “I think they wore down a little. They were still playing hard there at the end, but the fact that we can run 11 different guys on and off the field probably helped us a great deal.”

W.S. Neal finished with 165 yards of total offense in the loss with 147 coming on the ground on 44 carries and 18 coming in the air. The Eagles had eight first downs.

Quenton Samuels led W.S. Neal with  93 yards on 21 carries. Hawthorne had 40 yards on 12 carries before being injured. Haveard had 28 yards on eight carries and one touchdown. W.S. Neal had two fumbles and lost both of them.

Hawthorne was 1-for-1 passing with minus-1 yard. Chavers went 2-for-4 with 19 yards. Trey Taylor had all the catches and yards for W.S. Neal.

Straughn finished with 255 yards of offense with 144 coming on the ground on 39 carries and 111 coming in the air. The Tigers had 12 first downs.

For the Tigers of Straughn, Scott led with 101 yards on 20 carries and had two touchdowns.

Kinsaul finished 6-for-9 passing with 111 yards and one touchdown. Scott had two catches for 70 yards and one score. Straughn had one fumble and lost it.

Straughn will host Southside-Selma next week while W.S. Neal will host Cottage Hill. Both games are set for 7 p.m. and are region games.

Straughn’s Emily Hammett (left) and Jacie Williamson go for the volleyball Thursday night. The Lady Tigers bounced back from a... read more