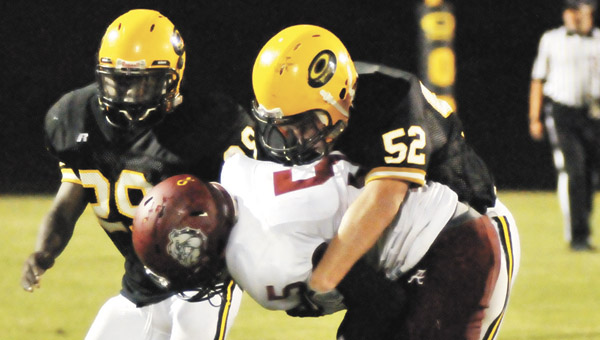 Opp’s going to put up its sails tomorrow as it travels to Daphne to take on Bayside Academy on the Eastern Shore.

This week’s contest marks the third week of the regular season and second week of Class 3A, Region 1 play for both teams.

OHS lost 22-7 to a good third-ranked T.R. Miller team last week. Two of the Tigers’ touchdowns were as a result of Bobcat turnovers.

The focus this week has been primarily on how well the team played in spite of the loss last week, Bobcats head football coach Jack Whigham said.

“If we hadn’t turn the ball over, then we would’ve been in the game,” Whigham said. “We gave up three touchdowns early in the game.”

TRM took a 22-0 lead at around 8:26 mark of the second quarter. From there, Whigham said his team played great defense.

“We should be disappointed about last week, but at the same time, we did some good things,” he said.

Tomorrow night, Opp will face an Admirals team who has allowed an average of 28 points per game on defense, while scoring only 36 points on average.

Hunter Slater, a 6-foot-2, 205-pound senior quarterback leads the Admirals’ offense. On the sides is wide receiver Gregory Wallace, who sits at 6-foot-1 and 175 pounds.

“He throws the ball real well,” the coach said. “He does a good job of running their offense.”

On Wallace, Whigham said he’s a good example of how well the Admirals run routs.

“They’re a very good technically sound offense,” he said. “They don’t make mistakes. If they need to run 12 yards on a rout, they’ll run 12 yards for the rout.”

Other than Slater and Wallace, Bayside Academy has a young, but really good offensive line, Whigham said.

Defensively, the Admirals are led by linebackers Zachary Dyas and Garris Goe

“They’re just a sound football team,” Whigham said. “They’re not going to beat themselves. We can’t do anything to help them.

“I hope we got a good crowd down there,” he added. “They’re going to one of the top two to three teams in the region. If we can beat them, then we’ll know where we stand.”

Kick off at Bayside Academy Football Field in Daphne tomorrow night is at 7.

He plays with no fear