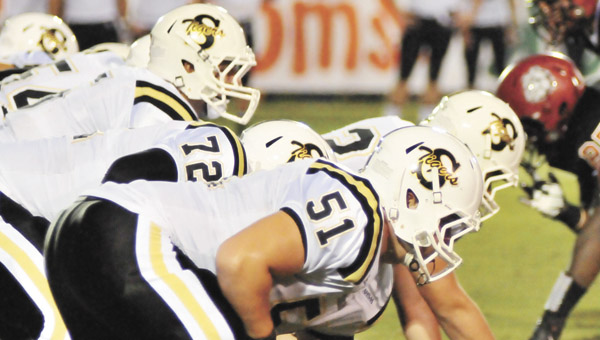 Straughn’s football team will be playing its first home game of the season Friday night. The Tigers host Southside Selma for their homecoming. |
Andrew Garner/Star-News.

Friday night’s going to be a homecoming, literally and figuratively, for the Straughn Tigers.

For the past three weeks, which included the 2013 Champions Challenge preseason game at Montgomery’s Cramton Bowl, SHS has been on the road for a long stretch of games.

Straughn’s coaches and players are excited to be kicking off at home this week as the Tigers host Southside Selma for their homecoming, head coach Trent Taylor said.

“I’m sure there are a lot of people who are going, why the heck are we having homecoming the third week of the season?” the coach quipped. “I guess it looks like something that Andalusia and Straughn planned together. (AHS head football coach Brian Seymore) certainly didn’t know when we were doing ours, and I certainly didn’t know when he was doing his. As a matter of fact, Brian had theirs at another day and it ended up being at another date.”

Andalusia’s also having its homecoming game on Friday. The Bulldogs welcome Hillcrest-Evergreen to their Municipal Stadium at AHS.

“To be able to be in the comfort and confines of your own place is exciting to all of us,” Taylor said. “As long as we don’t get caught up too much in homecoming — it’s for the alumni and those girls on the homecoming court, just as it is another football game. We certainly want to make a good showing.”

Last week, the Tigers came out with a 21-8 victory over W.S. Neal to start their Class 3A, Region 1 play. SSHS also won in a 20-6 affair over Cottage Hill Christian Academy.

This week at practice, the focus has strictly been on Straughn, not to take anything away from Southside Selma, Taylor said.

Right now, the Tigers have a lot to work on, especially on the offensive side of the ball, the coach said. Straughn is averaging 20.7 points per game, including the preseason challenge, where the Tigers beat Walter Wellborn 35-26. SHS has allowed an average of 15 points per game on defense.

“We’re not playing as well as I think we could play,” Taylor said. “I think our kids know they’re not playing as well as they’re capable of playing. To be quite honest with you, we’ve said very little about Southside this week just because we feel like there are many things we need to work on for us, especially on the offensive side of the ball. We’re just not clicking the way that I feel like we should be.”

Taylor said he’s confident that the team will get better on the offensive side of the ball.

“Defensively, they’ve played very, very hard, and it’s showed,” he said. “If you look at it, and you can count the preseason game, we’ve had a couple of goal-line stands this year. Our kids have made some crucial plays at crucial times in the ball games. They’re getting afer it.”

“In that defining moment, anything can happen,” he said. “There have certainly been some disappointments already two games in, but there have been some positives. We’re still struggling a little bit finding out what our personality is.”

A big help is if Straughn’s 23 seniors would step up and help set the tempo at both practice and games, Taylor said.

Kick off tomorrow night at Tigers Stadium is at 7.