Opp’s got that rhythm 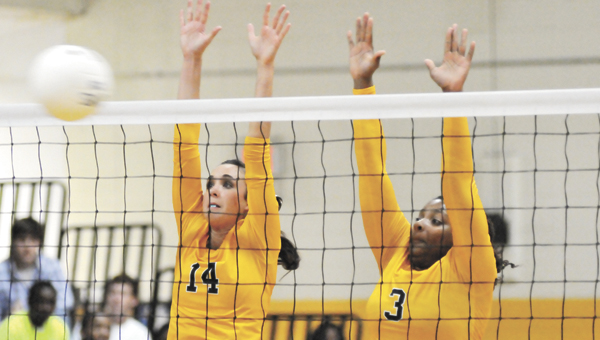 Opp set its own rhythm and stuck with it.

The Lady Bobcats swept Straughn 3-0 in area volleyball action Thursday night after establishing a fast momentum early to set the tone of the match.

“We had some bad passes to start off with,” Spurlin said. “Overall, I don’t worry about them (the girls) because I know they’re going to come back together.”

Opp cruised in the first two sets, winning 25-12 and 25-19, but faltered in the third when Straughn got in its comfort zone.

However, the Lady Bobcats regrouped after falling behind to take the final set, 25-18 for the win.

At the start of the first set, Opp went ahead 5-0, from which the Lady Tigers couldn’t recover.

The Lady Bobcats played a good pass and kill game to start the night, and ended the opener on a 7-0 run.

Free, an outside hitter, waited patiently for the right pass and unloaded on the ball when she got the opportunity.

Straughn settled down from the start of the second set after establishing an early lead at 4-2.

Defensively, the Lady Tigers were led by Jacie Williamson, who provided key blocks and kills on offense for SHS.

The rest of the middle set was a back and forth effort until OHS came out on the good end of a 5-0 run.

Straughn, who suffered its first loss of the season last night, settled down in the third set, taking advantage of some Lady Bobcats errors.

SHS held a 10-4 advantage, but Opp came back with a 4-0 run to force Rodgers to call a timeout.

“I’ve got to do a better job of getting us ready,” Rodgers said. “I saw a lot of things I can improve on as a coach. Hopefully, I can get our team to play better. I’m taking this loss squarely on my shoulders.”