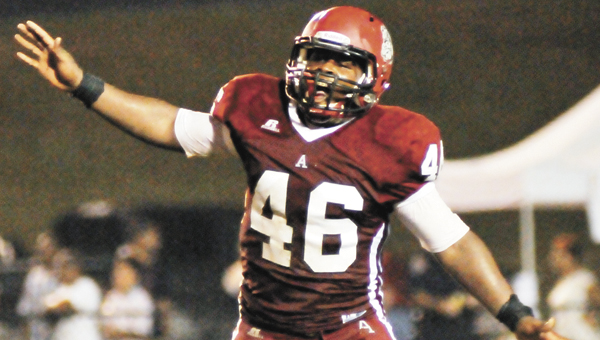 Andalusia’s Montel Lee celebrates after making a big tackle Friday night. Lee racked up 16 for the game against Hillcrest-Evergreen. The Bulldogs won 29-21 for homecoming. | Andrew Garner/Star-News

AHS went ahead 12-0 in the second quarter, and led 15-7 at halftime. The Bulldogs added two TDs in the second half and held on, despite a late surge by the Jags.

Late in the fourth quarter, the Jaguars cut the game to its final score and attempted an onside kick, where they recovered with 1:19 left on the Andalusia 45.

Hillcrest quarterback Keyshawn Roach, who was elusive inside the pocket, was sacked for a 7-yard loss by Lee.

Two weeks ago, AHS found itself in a similar situation against Straughn, but made a key defensive play to ice the game.

Lee mustered his last few ounces of energy to make an arm tackle on Roach, which he called a “shoe lace tackle.”

“I had to reach out,” the senior linebacker said.

On the kind of statement he wanted to make for homecoming, Lee said the team just wanted to stay focused and not have a repeat of last year, when the Bulldogs lost 9-6 to Clarke County in a region contest for their 2012 homecoming game.

“We should’ve won that one,” Lee said about last year’s homecoming loss. “We had to stay focused this week. That’s what we did tonight. It didn’t show in the first half, but we pulled through.”

Luckily for AHS, McCalman scored his first two touchdowns in the first half to give the Bulldogs a 12-0 lead.

Andalusia drove the field from its own 19 in the second quarter, capitalizing on a 36-yard pass to Brayden Burkhardt to put the ball at Hillcrest’s 25-yard line.

McCalman’s second TD came shortly afterward on a 1-yard rush with 8:16 left in the first half.

The Jaguars, who played Andalusia hard and physical all night, cut the lead to five in the second quarter when Roach scored his first of two TDs with 6:11 left in the opening half. With the extra point, the game went to 12-7.

Bulldog linebacker Daniel Henderson has assumed the kicking duties for the season. He put a 26-yarder through the uprights to increase Andalusia’s lead to 15-7.

With the victory, Andalusia improves to 3-0 overall, and 2-0 in Class 4A, Region 1. The Bulldogs visit Thomasville next week in region play.

AHS head football coach Brian Seymore said it was good to get the win against such a physical and talented football team.

“I’m very excited we won and to go 2-0 in the region,” the coach said. “That’s a good start. There are always things we can work on. That’s an 0-3 team that a lot of people don’t want to play. They lost three good football games. They may be there in the end.”

Hillcrest-Evergreen (0-3) got off to a rocky start on offense as Roach threw two interceptions into the hands of cornerback Jud Rogers.

Seymore said Rogers, a senior, does a good job of making sure everybody’s where they need to be.

“Jud, he’s the guy who gets everybody straight back there,” Seymore said. “He’s a seasoned vet. He understands what we’re trying to do. I think he takes a lot of pride in that. He’s a winner.”

McCalman added an 8-yard TD rush with 9:51 in the third to give AHS a three-touchdown lead.

Hillcrest answered more than a minute later when Rajos Smith scampered in from 56 yards. With the 2-point conversion, the Jags were still in it at 21-16.

Two costly penalties on Andalusia’s next offensive series gave the ball back to the Jags with 1:04 left in the third quarter.

Andalusia added its final TD when Trevor Parker scooted in from the 1 with 9:38 left in the game.

Roach scored his second touchdown of the night on a 1-yard rush with 1:21 left in the game after the Bulldogs gave the Jags a face mask penalty that put the ball at the 3.

When the Jags recoveed their onside kick, Seymore said he told the seniors they had to keep focused.

“That was very similar to the end against Straughn,” Seymore said. “I told the seniors that they needed to step their game up, make sure they stay focused and do the little things right.

“I was proud of my kids for that,” he said. “Montel made a great effort play on fourth down right there. It’s just good to finish the deal.”

Burkhardt had two receptions for 51 yards.