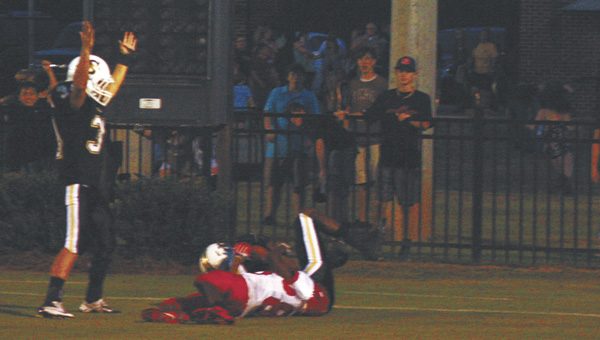 After playing three weeks on the road, Straughn came away with a decisive 35-6 homecoming win over Southside-Selma in its first home game.

The temperature was not the only heat factor as the Tigers used a balance attack to defeat the Panthers.

The offense struck for five touchdowns while the defense shined throughout in the region win.

“With homecoming, we were worried about being focused,” he said. “But I thought our kids came out and played really business-like. Playing a region game for homecoming is not what you want to do, but we took care of business and did what we needed to do.”

Starting on the 35, Devin Scott ran 25 yards on the first play of the game.

That set the tone as quarterback Rollin Kinsaul found Brice Scott in the endzone on a 38-yard pass.

Austin Worley’s PAT was good, and the Tigers led 7-0.

The defense forced Southside-Selma into a three-and-out.

A blocked punt set up the home squad at the 2-yard line where Devin Scott extended the lead to 14-0 with 8:32 in the first quarter.

The Panthers answered with a big return, but a flag nullified the play.

Both teams continued to trade possessions until Kinsaul threw a 22-yard touchdown pass to Brady Page to up the score to 21-0 with 1:37 left in the first period.

Southside-Selma made a threat, getting to Straughn’s 26 before turning the ball back over on downs.

Devin Scott had a big 19-yard run on first down to set up Keith Edgar’s 7-yard sprint with 5:03 left in the half.

The PAT was good, and Straughn had a comfortable 28-0 lead.

The defense continued its good work and did not allow a first down until 3:12 before both teams headed to the locker room.

Kinsaul called his own number with a 5-yard touchdown run to put the game out of reach. Worley booted his fifth PAT to make it 35-0 with 5:27 left in the third quarter.

The two teams traded possessions in the fourth until the Panthers (1-2, 1-1) got a 62-yard touchdown pass late in the fourth.

The extra point attempt failed, and Straughn recovered an onside kick to close out the game, much to the delight of the Tiger faithful.

Taylor said the team did well on defense and he was proud of the way his team played offensively.

“We had some big pass plays and wanted to do some different things there,” he said. “It’s still early, and there’s room to improve.”

Next week, the Tigers will make the trip to Mobile to face Cottage Hill in another key region matchup.