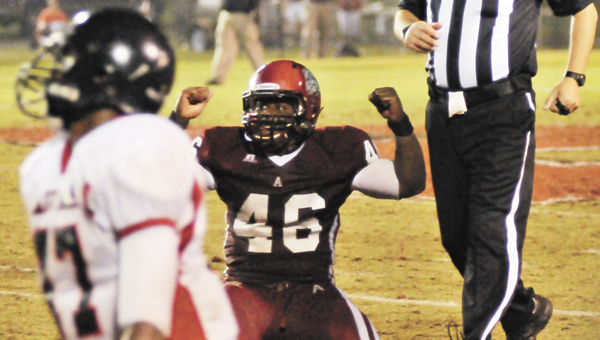 Montel Lee knew he had to stay focused last week in order to have a good game against Hillcrest-Evergreen.

The Andalusia senior linebacker showed how focused he was when he racked up 16 tackles to help lead the Bulldogs to a 29-21 homecoming victory over the Jaguars. His defensive play on the field earned him The Star-News Player of the Week honors.

Lee’s teammate, Michael McCalman, also earned Player of Week honors for his efforts on offense, where he scored three touchdowns and rushed for 156 yards on 20 carries.

Upon hearing the news that he made that many tackles, Lee said he was “pretty stunned.”

When asked if it was his best game, the senior said another game — in his mind — was even better.

“I feel like I played better in the Beauregard game last year than I did Friday night,” Lee said.

Andalusia fell to Beauregard 12-8 in the first round of the 2012 Class 4A state playoffs last November.

There was no mistaking Lee’s focus on the field.

Hillcrest-Evergreen couldn’t get much going early on in the contest. In addition to his tackles, Lee got a hand on a Jaguars punt during the third quarter.

Lee then managed to make a tackle for a loss on an elusive Trae Lewis and get his hands on another punt on the Jaguars’ next offensive series.

The fourth quarter was where Lee did his most damage.

Keyshawn Roach, Hillcrest-Evergreen’s multi-talented quarterback, was sacked for a loss of five yards by Lee to turn the ball over on downs with 6:47 left to play.

After HHS had cut the game to 29-21, the Jaguars recovered an onside kick and was in prime scoring position with less than a minute to go.

That’s where Lee mustered all he had left to make one last tackle on Roach to ice the game.

His last play on defense was his most memorable, Lee said.

“I had to make the arm tackle,” he said. “I was exhausted after that one. All the effort was gone after that.”

Lee said he thanked God for allowing him to make the play in the first place shortly afterward.

“I just remember saying “thank you Lord for helping me make that play,'” he said. “That’s the only thing I said.”

Faith is a big part of Lee’s game.

Staying focused was what led him to have a great night on defense, Lee said.

“That was the big issue going into the game with it being homecoming week,” he said. “We wanted to start out 2-0 in the region. I just had to stay focused.”

Lee said it will be interesting to see how the team responds to being down, if it does trail at any point during the game. The Bulldogs haven’t trailed a quarter, yet.

“We need to show what we’re made of,” Lee said. “Last year at this time, we were coming into the Thomasville game 3-0 and ended up losing to Thomasville. We didn’t show up for real. We got a little carried away.”

Lee is the son of Laura Lee and Willie Lee of Andalusia.

Pleasant Home and Florala will engage in a region and rivalry battle Friday night at Mathews Stadium in Florala. This... read more