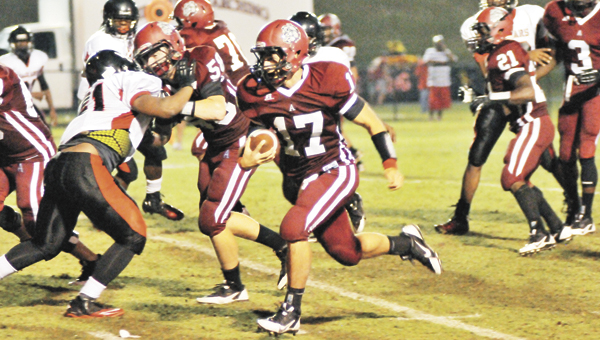 McCalman made it look like he was following a textbook last week as he rushed for 156 yards on 20 carries and scored three touchdowns in the Bulldogs’ 29-21 region victory over Hillcrest-Evergreen on homecoming.

The senior scored on runs of 9, 1 and 8 yards and earned The Star-News Player of the Week honors. His teammate, Montel Lee, also earned the same honor as he racked up 16 tackles in the win.

McCalman said the offensive line deserves most of the credit for his play last week.

“The offensive line did a great job,” he said. “They blocked it well. They stayed on their blocks for a long time. There were a lot of big holes.”

Beyond the line, the receivers did a good job of going up for balls and getting yards after the catch, McCalman said.

“Everybody did a good job of finishing the play,” he said.

McCalman scored the first two TDs to give Andalusia a 12-0 lead with 8:16 left in the first half.

The Jaguars then cut the game to five at 12-7. As the buzzer sounded for halftime, the Bulldogs increased their lead to 15-7 on a 26-yard field goal from Daniel Henderson.

McCalman scored his last TD on an 8-yard dash with 9:51 left in the third quarter to give AHS an outright 21-7 lead.

When asked what he sees down field that forces him to run, McCalman said it’s basically looking to see if things are collapsing or if there are receivers that can’t get a catch.

Most of the time when McCalman does decide to run, he’s on the other end of a tackle.

Without any hesitation, McCalman pops up and gets ready for the next play.

“That just pushes me to keep going, no matter what happens — no matter how hard i get hit,” he said.

Dropping back for passes is also something McCalman said he’s working toward.

“We throw a whole lot in practice,” he said. “I do hope as we go along that I’ll be able to make reads better and be more accurate in games.”

McCalman is the son of David and Stacie McCalman of Andalusia.