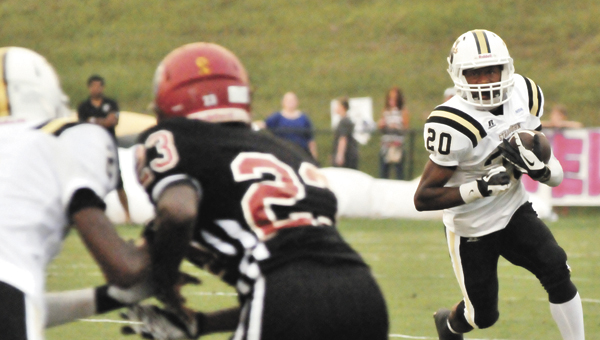 Yard by yard and game by game, Straughn’s getting back to its offensive prowess as the Tigers travel to face Cottage Hill Christian Academy on Friday night in Mobile.

This is Joe Downey’s second year as the Warriors’ head football coach.

“Obviously, looking at their roster, they’ve got more kids out,” Taylor said. “Watching them on film, they’re certainly playing hard. It’s just a matter of time.”

Last season, the Warriors went 0-9 and are hoping to come out with a different result in 2013.

Cottage Hill runs out of a spread offense, Taylor said.

“They’re looking to throw it around all over the place, which is not something we’ve seen,” he said. “We kind of thought we’d see that this past Friday night against Southside, but they didn’t do that either. They were in gun, but their run to pass ratio was 2:1.”

Cottage Hill won’t be the only team Straughn will face running out of the spread. The Tigers host Elba next week in a non-region contest.

“It’s something we definitely need to see,” Taylor said about the offense. “It’s certainly not anything we can simulate a whole lot at practice.”

Straughn’s more known for its use of a flex bone offense. The Tigers will be using their offense against another 4-4 and 4-3 defensive scheme this week.

Taylor said one area the Tigers have improved on is their scoring, especially last week in the win over the Panthers. In the week before, Straughn defeated W.S. Neal 21-8 to get its first win of this season.

“We probably were more proficient offensively than at any point this year,” the coach said about last week. “The fact of the matter is that while as a coach you’d like to pride yourself on being in great shape and being conditioned, and certainly make no mistakes that is a big part of the game, but for those guys up front, it just doesn’t come as easy.

“Dealing with the heat has not been something we’ve done a good job of,” Taylor said. “There was a different focus last week, even during the week leading up to the game, certainly in the way we attacked up front. There’s no doubt (the game of football) is about attacking folks offensively and defensively.”

After this week’s game, it’s not going to get any easier for the Tigers.

“We have Cottage Hill this Friday of course, and then next week against Elba,” Taylor said. “After that, our schedule is extremely tough. We know that, the kids know that. We’ve got to make sure we’re clicking as we’ve got to be clicking at that point.”

Kick off Friday in Mobile is at 7 p.m.

Tigers bump up to No. 7 in recent poll