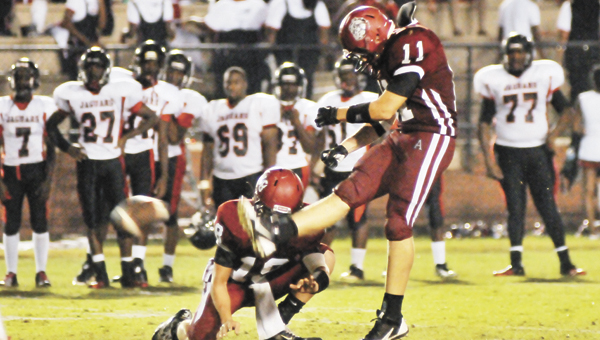 Andalusia will travel more than two hours to face an always-talented tenth-ranked Thomasville in the western part of the state tonight, where kickoff’s at 7.

The Bulldogs are undefeated so far this season after a 29-21 Class 4A, Region 1 victory over Hillcrest-Evergreen last week. Thomasville had a different outcome in a 28-27 loss to second-ranked and defending state champion UMS-Wright.

“They’ve got a lot of football tradition,” Seymore said. “It’s a huge deal in Thomasville, Alabama. Year-in and year-out, they’re always a competitive team in 4A. Nothing’s different this year.”

“A couple things didn’t go their way and they lost a great game,” he said. “I know it was very disappointing to (THS) coach (Jack) Hankins. I know his kids will be prepared for (tonight’s) game .It’s a huge rival game for both teams basically because everybody’s jockeying for those four playoffs spots.”

With their loss last week, the Tigers fell to 2-1 overall, and 1-1 in the region.

A win this week for either Andalusia and Thomasville will give each a boost going into the second half of the season.

From a team stand point, it starts up front on Tigers’ offensive line.

Desmond KeKe Pritchett, a senior offensive lineman who sits at 6-feet, 255 pounds, is their best player up front, Seymore said.

“He’s what you expect out of an offfensive lineman,” the coach said. “He’s got tremendous speed. He gets out in front of his backs and does a solid job leading his backs.”

Thomasville’s offensive attack, which is Wing-T, yields for better results if you’ve got a set group of plays to run, Seymore said.

“I’m just impressed with their offensive front,” he said. “To me, that’s the key to their offense. They’ve always had good skill players. They’ve got a system that those kids believe in, and it works.”

It’s going to be vital for Andalusia’s defense to stay on its keys, assignments and responsibilities this week, Seymore said.

“We can’t go to sleep on our reads and we’ve got to do a better job of tackling,” he said, noting that Andalusia missed 42 tackles last week against the Jaguars.

This week at practice, the Bulldogs have been concentrating on keeping their leverage on the outside and of course, tackling.

“We can’t do that against Thomasville,” Seymore said about missing 42 tackles. “They’re too good of a football team.”

A big question that could be answered for Andalusia tonight is how the Bulldogs respond to falling behind in a game. AHS hasn’t trailed at any point this season.

“That’s the biggest question,” Seymore said. “We’ve done a pretty good job of keeping teams at bay at times. We haven’t addressed our team being down. That’s what’s going to happen sometime this year, probably (tonight). If we keep our composure and play to our capability, then we’ll be OK.”

On Thomasville’s defensive front, which is similar to Andalusia, the Tigers like to load the box to force the quarterback to throw down field.

Another key this week is to give AHS senior QB Michael McCalman time to read the coverage and find a player down field for a pass.

“We’d definitely like to throw the ball down the field more,” he said. “The most we’ve thrown the ball is 17 times. I’d like to throw it in the mid 20s. It’s a work in progress.

“You don’t want to be your best in week three, but you hope you’re getting better every single day,” the coach added. “You hope you have a good week of practice and a good week of preparation. Now, we’ve got to gake it to the football field, get better for Friday night.”

Red Level’s in search for a win. The Tigers hope to extinguish their three-game skid tonight in Kinston in a... read more