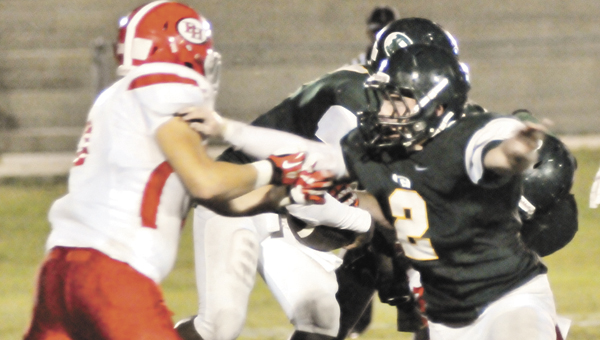 Florala’s Austin West (2) provides a block near the end of the Wildcats’ 34-24 victory over Pleasant Home Friday night. | Andrew Garner/Star-News

Florala’s Austin West scored three touchdowns on 97 yards of rushing to help lead the Wildcats to a 34-24 victory over Pleasant Home on Friday night at Mathews Stadium.

The Wildcats got off to a quick start in the first half, scoring a TD on each of their first three possessions.

Pleasant Home trailed early after the Wildcats scored on their first possession, and never really made a threat throughout the remainder of the game.

For FHS, this is the first time the Wildcats beat the Eagles since the 2007 season.

FHS head football coach Bubba Nall was so proud of his boys and coaches for getting the win.

“(PHS head) Coach (Cody) McCain and their bunch do a heck of a job and play hard,” Nall said. “We just made a few more plays tonight. We didn’t turn the ball over on offense, and our defense played great when they needed to.”

West scored his first TD on a 1-yard rush after the Wildcats pushed down field from their own 40.

Blake Donaldson found FHS quarterback Kyle Price for a reverse for a 55-yard gain that put the ball at the Pleasant Home 5.

With the 2-point conversion, the Wildcats led 8-0 with 8:51 left in the first quarter after West’s first score.

The Eagles answered back on their second possession of the game on a 1-yard TD rush from Justin Helms with 58.6 seconds left in the first.

The Wildcats marched down the field again as Price found Ray Hall for a 23-yard pass to put the ball at the Eagles’ 1-yard line.

After a couple of mishaps, West found the end zone with 9:40 left in the second. Price found Tanner Rodgers for the conversion and FHS led 16-6.

When PHS needed to move the ball on either short or long gains, the Eagles called on Carl Whitehurst.

Whitehurst sparked the Eagles’ next drive, running 16 yards before scampering in for a TD from the Florala 3 with 5:51 left in the half to cut the lead to 16-12.

PHS had a chance to cut Florala’s lead again on a nice pass from Garrett Barton to Jon Cole Chesser, but the score was called back due to a chop block penalty.

Like they did on their opening drive, the Wildcats punched a score into the end zone.

Donaldson found Price for the flee flicker from eight yards with 10:44 left in the third to give FHS a 28-12 advantage after a failed 2-point conversion attempt.

The Eagles (1-3, 1-2) then bucked up on the offensive line, creating some needed holes and drained a little clock on their next drive, which culminated in a 1-yard TD rush from Whitehurst.

Florala’s defense came up with a big stop early in the fourth on a 4th-and-2 play from its own 21-yard line to hand the ball over on downs with 8:59 left to play.

At Pleasant Home’s 26 yard line, West found a crease on the right end, dodged a couple defenders and found pay dirt with 2:55 left for his third TD of the night.

“He’s got a lot of heart,” Nall said about West. “This football team knows that. That last run down here, I think that just says it all about that young man. He’s that right kind of guy. He’d be the first to tell you that he coudn’t do anything without the rest of his teammates.”

PHS wasn’t going to go away despite the large deficit it had to the Wildcats.

The Eagles drove the field from their own 32, and Barton found Corey Self with no time left in the game for a late score.

“The credit and everything goes to them,” McCain said about Florala. “They outplayed us for the whole game. Positive wise for us, our kids played to the very last second of the game.

“We didn’t get that same effort from them last week (in a 41-12 loss to Kinston). I was at least pleased that our kids fought to the last second of the game.”

Ta Bonham intercepted a pass and ran it back 36 yards for a touchdown in Opp’s 7-0 region victory over... read more