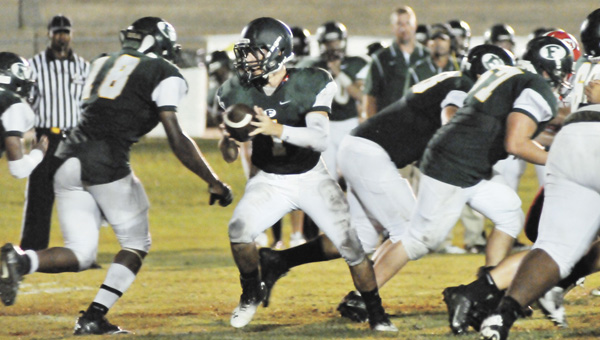 Florala quarterback Kyle Price looks to hand the ball off during the Wildcats’ 34-24 victory over Pleasant Home Friday night. FHS will face a similar opponent in J.U. Blacksher this week for homecoming. | Andrew Garner/Star-News

Florala’s in for another big and physical gauntlet this week as the Wildcats host J.U. Blacksher for their homecoming Friday night at Mathews Stadium.

FHS is coming off a big 34-24 Class 1A, Region 2 victory over cross-county rival Pleasant Home.

PHS is similar to the Bulldogs of JUBHS is many respects, Wildcats head football coach Bubba Nall said.

“They’re big, they’re physical and they’re one of those teams who are a play or two away from having won a couple of ball games,” Nall said. “It’s going to be one of those hard-nosed round-and-pound games like it was this past Friday.”

In fact, the Bulldogs haven’t had the luxury of winning a game this season. The closest J.U. Blacksher came to a win was last week in a 36-22 loss to A.L. Johnson in Region 1 play.

The key last week for the Wildcats (2-2, 1-2) was their turnover ratio, which was a problem for Florala the first few weeks of the season.

“Last week, we eliminated turnovers,” Nall said. “I think that was the difference in that ball game. This week, if we can do the same thing and continue to get a little bit better, then I think we’ll have a chance.”

The Bulldogs will run their offense out of a Wing-T formation. On defense, JUBHS runs out of a 5-3, just like PHS.

A Wing-T offensive formation can hurt a team if the right keys aren’t read during the game, Nall said.

“They’ve got some kids who can run over the ball,” he said.

With it being homecoming week, coaches have the tall task of trying to keep their players focused on the task at hand — winning Friday night’s ball game.

Nall said he’s asking his players to give him a little bit of their time each day.

“We go out there and tell them everyday to give us two hours at practice,” Nall said. “Whatever is going on in the outside world we need to leave that alone, we need to have fun and just relax and play football for two hours. Outside of that, it’s a circus.

“That’s what we’re trying to do,” he said. “As a head coach, you’re also trying to get them to understand that homecoming’s fun, but if we dont’ win, the dance is no fun, the alumni meetings are no fun — all of that. There are people who are coming back, but they’re ultimately coming back to see their team play. Hopefully, we’ll be prepared.”

Getting prepared for the Bulldogs will be a lot easier this week because this will be the first week the Wildcats will have practiced coming off a win, the coach said.

“It’s hard to come back to practice after two hard losses,” Nall said. “Our kids played hard. I looked at the film this weekend, and we looked a little bit different. Hopefully, we’ll have a good week of practice. I think we will, and we’ll see what hpapens.”

Kick off is at 7 Friday night.