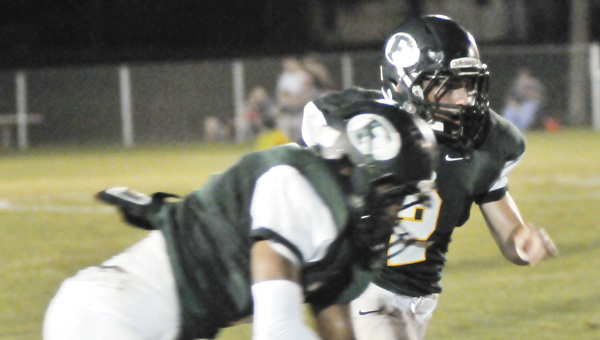 The Florala junior played more than average last Friday night when he scored three touchdowns while racking up 148 yards of total offense in the Wildcats’ 34-24 region victory over Pleasant Home.

West’s play on the field earned him The Star-News Player of the Week honors.

When asked about the effort he portrayed on the gridiron last week, West said it all started with the front seven.

“I’m just an average running back without my line,” he said. “(FHS quarterback) Kyle (Price) made some good reads and the defense stepped up this week.”

In the victory, West scored twice from the 1-yard line and once late in the game from the 26. Additionally, Price added a rushing and passing touchdown in the effort.

FHS head football coach Bubba Nall said West is one of those players who would do anything for the team, both sides of the ball, where he plays.

“He’s a hard-nosed, run-through-that-wall, whatever-you-need-me-to-do kind of guy,” Nall said. “All of his brothers are the same. He comes out of good stock. He’s like that in everything he does. He’s the same way in baseball, too.”

“He’s got a lot of heart,” the coach said Friday. “This football team knows that. That last run down here, I think that just says it all about that young man. He’s that right kind of guy. He’d be the first to tell you that he coudn’t do anything without the rest of his teammates.”

West has played football since he was 5 years old for Florala’s tiny mite league. He considers this sport to be his chosen sport.

“I just love the game,” West said. “In baseball, you do’t get to suit up and hit somebody.”

West will soon strap on the pads again this week as the Wildcats host J.U. Blacksher for their homecoming.

“I think it’s going to be a good game this week,” West said. “We just have to have a good week at practice and step it up.”

Austin is the son of Christy and Barry West of Florala.

Bulldogs ranked in this week’s poll

As if there wasn’t any surprise at all, Andalusia found itself in this week’s top 10 in Class 4A of... read more