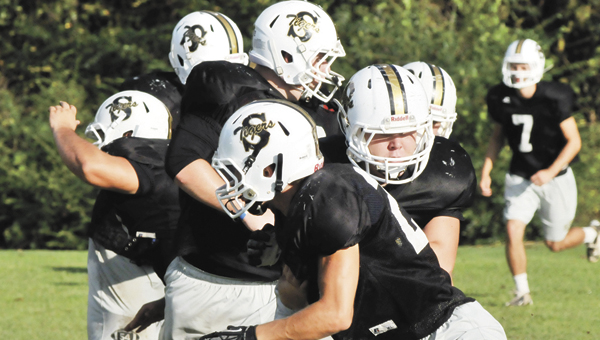 “They have athletes everywhere.”

“They sure have them,” Taylor said. “They have a tremendous running back in (Darrean Burks). I know every coach says this, but I think from a speed stand point and an elusiveness stand point, he’s obviously the best we’ve faced so far.”

Burks and the rest of the EHS football squad will come to sixth-ranked Straughn tomorrow night for the mid-season contest, which starts at 7 at Tigers Stadium.

Burks was a big part of Elba’s 2011 state championship team and leads the team in rushing with 490 yards in four games with eight touchdowns.

“He’s just a tremendous talent and a guy, whether it’s kick off or a punt or in the back field, he’s a threat to go the distance at any time,” Taylor said about Burk.

Taylor said his coaching staff got the opportunity to see Elba play in a preseason contest against W.S. Neal. In the game, EHS played even with the Eagles all the way until the final horn, despite losing.

“Unfortunately, we’re not playing them in a fall jamboree or in week one,” Taylor said. “On film, especially in the last two weeks, they’re a whole different football team right now than they were in the fall jamboree.”

Other than Burks, Elba has quarterback Ramsey Rigby, who is EHS head coach Ed Rigby’s son. Ramsey has thrown for 549 yards with seven touchdowns and four interceptions this season.

Rigby’s favorite target is Blake Edwards, who has 14 catches for 21 yards and three TDs.

“He throws the ball really well,” Taylor said about Rigby. “Burks isn’t the only tremendous athlete they have.”

Defensively, Elba runs a 3-3 stack like Straughn. Denzel Cole is the top tackler for EHS. Cole has racked up 35 tackles this season. Defensive lineman Michael Smith has 29.

This season, the Tigers have scored three touchdowns on defense with two of those on interception returns by Edwards.

Friday night might be a tough task for Straughn, but Taylor said the players know what’s ahead of them, and added that the team needs a game like this.

“I think our kids handled the last two weeks very well,” the coach said. “Even though we couldn’t convince them of any other thing than what they saw on film, I think they still went out in the beginning of each game and took care of business and did what they needed to do. From that stand point, I’m impressed of how we handled that.”

Bulldogs ranked in this week’s poll

As if there wasn’t any surprise at all, Andalusia found itself in this week’s top 10 in Class 4A of... read more