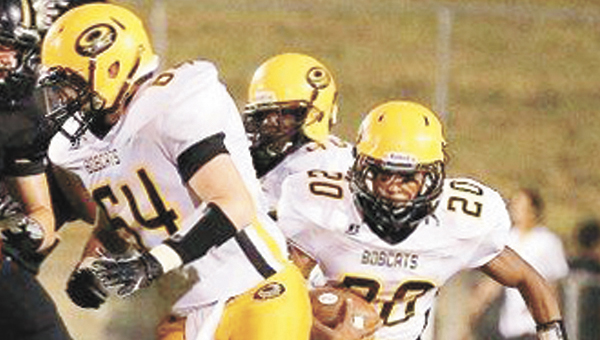 Winning tonight against Andalusia is a must for Opp’s Dakota King and the rest of the senior Bobcats.

King, a senior starting offensive tackle who also plays on the defensive line, said he believes undefeated Andalusia can be beat.

The Bulldogs are coming off a big 20-17 victory over Thomasville, where they had to crawl back from an 11-point deficit.

King said this is an important game for the senior class. Opp hasn’t beaten Andalusia since 2009 when King was an eighth grader.

“If we don’t beat them this time, then it’s the last time for the seniors,” he said. “It means a lot to us. It would make a statement for the rest of the year — playing through it.”

As a group, King said the seniors feel that if they win, it will make a “statement” for the rest of their lives.

“It’s something to remember,” he said.

King said in order to prevail and get a win, his team has to follow the “game plan.”

“We have to stick with the game plan our coaches give us, and execute it to the best of our abilities,” he said.

After tonight, the Bobcats have home contests against Southside Selma, Cottage Hill and W.S. Neal, along with an away game at Straughn in their region play. Opp’s regular-season finale is at Pike County on Nov. 1.

King said a win tonight would be big.

“It definitely would give us a boost and help our heads for the rest of the season — getting a win against everybody else,” he said.

King is the son of Lori and Kenneth King of Opp.

Henderson’s wait is over

Andalusia’s Daniel Henderson(11) has been waiting for tonight’s game for two years. |Andrew Garner/Star-News For the past two years, Andalusia... read more