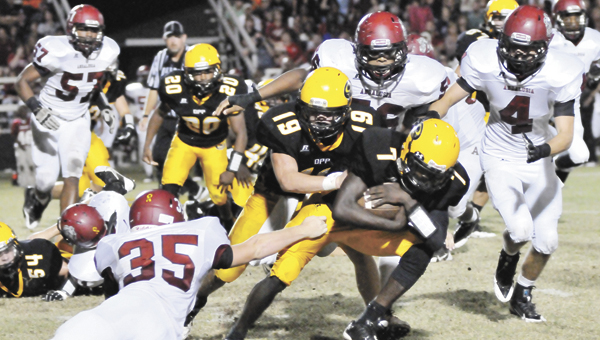 Andalusia converted on three Opp turnovers in the second half and rolled to a 43-26 victory Friday night in front of a sell-out crowd at Channell-Lee Stadium.

Trailing 20-12 at halftime, the Bulldogs didn’t panic at the start of the third quarter, striking on the Bobcats’ first offensive series.

Andalusia ran back an interception for a score, punched the ball in after an Opp fumble to take the lead it would never give up and iced the game on an offensive drive after the Bobcats gave up another interception.

All of this came after Opp dictated the first half after the Bulldogs went ahead 6-0. OHS (2-3) scored three touchdowns — one of which was a fumble recovery in the end zone — to carry the eight-point lead into the break.

Bulldogs head football coach Brian Seymore said it was give and take on the field.

“I think we gave them a couple big ones in the first half, and I guess they were kind enough to give them back to us in the second half,” Seymore said. “Our kids responded. We found a way to make a run in the second half.”

With the victory, Andalusia improves to 36-31-3 head-to-head with Opp in the last 70 meetings. Additionally, the ninth-ranked Bulldogs improve to 5-0 on the season heading into a region road contest at Clarke County next week. Opp hosts Southside Selma.

OHS head football coach Jack Whigham said the turnovers in the second half killed his team.

“We played real well the first half,” Whigham said. “We turned it over the first two possessions of the second half. If you turn it over, then you’re going to lose.”

Whigham added that he thought the players played hard all the way to the end.

“I thought our coaches had a great game plan,” he said. “They’re a very talented. They’re very well coached. They didn’t panic at halfitme. We didn’t panic at halftime, but we just turned it over twice. Nobody was trying to turn it over, we just did.”

Andalusia’s Trevor Parker grabbed the Bulldogs’ first of two interceptions early in the third quarter and ran it back 21 yards for the score to cut the Bobcats’ lead to 20-18 with a failed 2-point conversion.

On Opp’s first play from the line not eight seconds after Parker made his interception return, Bobcats quarterback Orlando Lacey carried the ball for about six yards, where he coughed it up for a fumble with 10:36 to go in the third.

The Bulldogs took advantage, as senior quarterback Michael McCalman made two good runs before dashing the ball in from 1-yard out for a 24-20 edge and lead Andalusia would never give up.

AHS held OHS to a three-and-out on, and got the ball back with eight minutes left in the third.

Derrick Dorsey, who led in rushing with 104 yards on 14 carries, scored his only touchdown of the night on a 5-yard scamper at the 6:15 mark of the second-half opener.

Andalusia’s defense, which made a big adjustment at halftime, held the Bobcats again to a three-and-out.

Opp came back with a good defensive series to hold AHS, but couldn’t get anything going on the ball to end the third quarter.

To start the fourth quarter, Andalusia put the game way out of reach, completing a 10-play, 65-yard drive, where McCalman scored on a seven-yarder. The Bulldogs led 37-20 and from there, put the game in cruise control.

It didn’t get any better for OHS on its next offensive drive. Lacey dropped back and let a pass go right into the hands of AHS senior linebacker Daniel Henderson.

“I saw his eyes and right when he stepped back, I felt like he was going to throw it to me,” Henderson said.

Henderson, along with his senior classmates, has defeated Opp four times in a row. He said it felt great to get the win.

“We came out and played pretty flat in the first half,” Henderson said. “In the second half, we showed a lot of heart. It shows that in the big games, we can do well enough to win.”

The Bulldogs’ third touchdown after a turnover came with 4:59 left in the game.

Brayden Burkhardt, Andalusia’s back up QB, saw fit to shake a few tackles on a rush and darted 36 yards for a TD to give his team a 43-20 lead.

“Our offense stayed pretty true and stayed with our game plan,” Seymore said. “Their kids played hard. They do a great job — these kids over here.”

Lacey recovered from his earlier mishap and found an open Cale Pierce in the end zone for a 10-yard TD pass to give the Bobcats some late life. Lacey finished 9-of-13 for 102 yards and two scores in the air to lead OHS.

Whigham said he liked how his players played late in the second half.

“We’re disappointed for our seniors,” the Opp coach said. “I’m disappointed for my coaches who worked so hard to give us a chance to win the game. Our plan would’ve worked, but you’ve got to execute all four quarters, not just two.”

Opp took a 7-6 lead with 2:50 to go in the first quarter when the Bobcats blocked a punt, and Brandon Williams recovered the ball in the end zone.

The Bobcats then got an onside kick, and Lacey found Hennis Washington from 29 yards for a score with 0.9 left in the opening 12 minutes.

Lacey, who had 67 yards on 15 carries, rattled Andalusia’s defense by streaking around the right end after breaking a few tackles, to hit pay dirt on an 80-yard run with 7:08 left in the first half.

McCalman scored his first touchdown on the ground with 7:44 remaining to cut the lead to 20-12. His only passing TD came with 8:38 left in the first on a 20-yarder to Devante Jackson.

After getting off to a somewhat OK start, sixth-ranked Straughn regrouped and pelted Elba 34-8 on Friday night at Tigers... read more