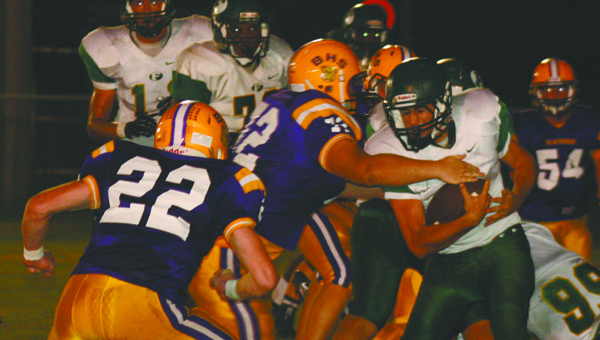 It was a victory worthy of homecoming bragging rights as the Florala Wildcats shut out the J.U. Blacksher Bulldogs Friday 36-0.

And the packed-out stadium loved it as crowds made their Wildcat pride known every time the numbers clicked up on the scoreboard.

Coach Bubba Nall said now at 3-2 in the season, the win put the ‘Cats in a position not seen in more than five years.

“This is the first time we’ve had a winning record halfway through the season since 2007,” Nall said. “Our kids have worked hard. We pitched a shutout. I don’t know the last time that happened.”

The enthusiasm was apparent on the sidelines as players shouted encouragements on and off the field.

Nall said the Bulldogs came out strong in the first quarter.

“They came out big and physical, just like we thought they were going to be,” he said. “But we came out and got things rolling in the second quarter. We had a few good passes, too.”

With 4:20 left in the third, the Wildcats did it again as West rushed for an 81-yard touchdown. The PAT was good, which brought the score to 30-0.

The final touchdown of the night came with 5:23 left in the fourth, but the PAT was no good.

Nall credited the win to the community as a whole.

Red Level didn’t execute Friday night and that resulted in a 44-6 loss to Samson. “We really have nobody to... read more