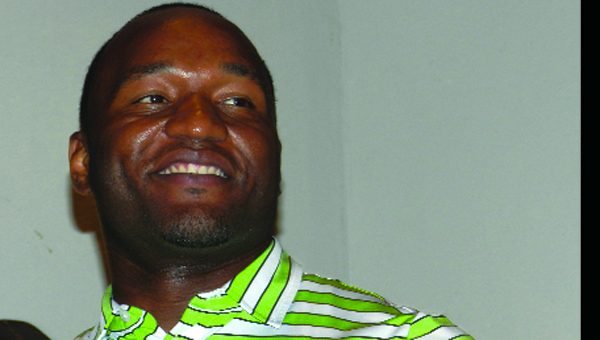 “Well, Coach Saban has an office. It’s huge. His desk is way on the other side.

“He called me one day. You know if he calls you and tells you to come to his office, you’re in trouble.

“So he called me, right. I’m like, ‘I’m gone screen your call.’ Coach Saban doesn’t call his players, especially on Sunday.

“He called me back and said, ‘Jimmy, hey. Come to office, tomorrow morning.’

“He has this button on his desk. When you come in his office, he presses the button and it slams the door. Boom,” Johns said. “Now your heart is pumping. Coach Saban just slammed the door behind me.”

One might say the meeting was providential, for it woudn’t be the last time a door would slam behind Johns.

Johns said he left Saban’s office, did a deal in the parking lot, hopped on his moped and went home.

The next morning, headed to a workout, he stopped at the store to stock up on Faygo, his favorite soda.

“I’m pulling up to the store and an Expedition pulls up in front of me and pulls a gun,” he said. “Now I’m a rapper. I’m not a football player any more, I’m a rapper slash football player. The first thing that comes to mind is, ‘This mother gone rob me.’

“I throw it in reverse, look in the rearview mirror, and see another one,” he recalled. “I think, ‘There’s two of ‘em trying to rob me.’

Johns said he realized he was caught and his heart dropped.

“He said, ‘Freeze. You’re under arrest.’

“I said, ‘I ain’t did nothing,’ ” he said. “I realized it was real. Life was real then. A light came on. They threw me in the back of the Expedition. One of them jumped in my car, drove to my house, took me to my house without me telling where, took my keys and opened the door.

Eventually, he got a 15-year sentence with a one-year split and five years probation. Just like in Saban’s office, a door slammed behind him.

“And it was all because of decisions that I made,” Johns said.

Growing up as one of five children in a single-parent home in Brookhaven, Miss., Johns made a lot of right choices.

He grew up between two projects, but declined to choose sides between two gangs because he wanted to be an athlete.

And he was headed for an NFL career.

But in 2007, his path changed. His grandfather died in a car accident. His line coach at UA was fired.

“I stopped being a leader and I started being a follower,” he said. His grandfather had influenced him to always work harder than anyone else.

“I got out of character. I stopped being a leader and I started being a follower,” he said. “I was following the wrong people. I stopped hanging out in Tuscaloosa. I started hanging in Birmingham.

“The little kid who scared to pick a side (between two gangs) — he chose a side,” Johns said. “I started seeing money. I seen the cars. I seen the women. I seen everything. And I wanted to be a part of fit. Because I thought ‘It’s not fair for them to have it and me not to have it.’ ”

Johns said he was traveling to Miami, on the stage with L’il Wayne and other rappers, selling cocaine.

“I was just an average person who held back on those decisions,” Johns said. “And when a little adversity came into my life, my life changed. I stopped being a leader; I started being a follower.

“Everything that I had worked for until that time, because of one decision that I made, was washed down the drain,” he said.

“You guys are going to go through the same things. Drugs. They’re here. Smoking. Drinking. Hanging out. It’s all here,” he said.

He learned from the bad decisions, too, Johns said.

“Life is about persevering,” he said. “Overcome those problems, and do what is right.

“Today, if we go out and we say we gone clean the community up by picking up trash, I’m gone have the biggest trash bag.

“If we gone cut grass, I’m gone cut the most,” he said. “I’m gone be the best because that’s my character. Be the best, be the leader.”

Johns told students the decisions they make now will affect their futures.

“It’s not your team mates. Not your mother or your dad. Not Dr. Shakespeare. It’s you,” he said.

“No one is perfect,” he said. “You’re never going to be perfect. But you can make right on those decisions.

“You can be the No. 1 payer in state, play for the University of Alabama, have children, go to prison, but you can have attitude and work habits to rebuild from there.

Guys, you are not stationed at any place,” he said. “You’ve never arrived. You can always keep on growing. Always make the right decision.”

Now back in school and working as a car salesman, Johns told students they have to make their own success.

“You create your own success,” he said. “No one else.”

Johns also will speak at St. Mary’s Episcopal Church at 4:30 this afternoon, and will tailgate with fans in the church hall during Alabama’s game against Ole Miss. Food will be provided and all are welcome.

Scoping out the new range