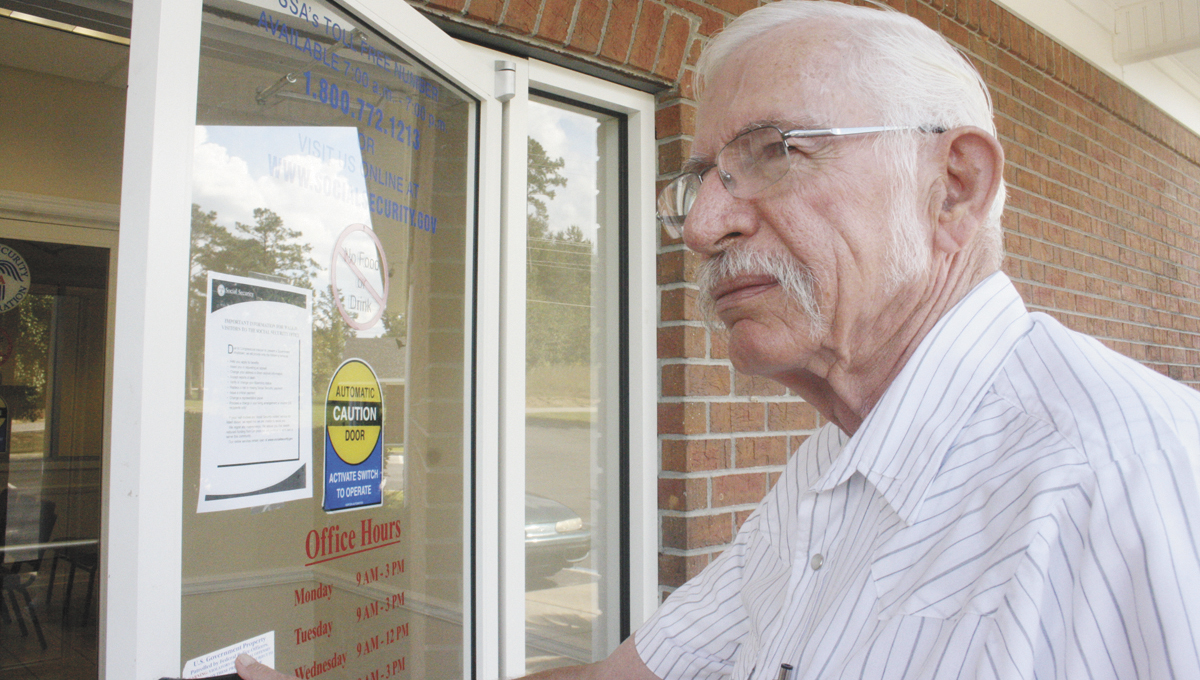 Despite the government shutdown, Jack Sturm drove from his Damascus Community home Tuesday to the Andalusia Social Security Office.

The office is one of the few federal offices in Covington County. Others include the U.S. Department of Agriculture – which maintains the Conecuh National Forest – and the National Resources and Conservation Office. At the NRC office, the phone went unanswered Tuesday.

Federal agencies are under orders to close down all but essential functions after Congress hit a stalemate over funding government operations, with a critical faction of Republicans fighting to stop the Affordable Care Act from taking effect on Tuesday as scheduled.

Tim Mersman, district ranger at the Conecuh, said his office was directed to refer all media questions to the Office of Management and Budget in Washington. A recording said the office was open with limited staff and directed callers to leave a message.

At the Social Security Office, no public information was given; however, a call into the office gave this message:

“During government shutdown, local Social Security offices except card centers, are open for a limited number of services. One can access many of these services online, as well as view list in field offices.” The message stated the Andalusia office was open daily from 9 a.m. until 3 p.m. to help with limited services.

The cancellation of training flights from Whiting Field slowed traffic in Brewton’s Municipal Airport on Tuesday, but at South Alabama Regional Airport, it appeared to be business as usual.
Co-manager Jed Blackwell said Ft. Rucker training flights were still on go Tuesday, and the airport had its normal amount of traffic.

The shutdown has also forced the U.S. Department of Education to furlough 90 percent of its workforce for the week, according to the department’s contingency plan.

That has interrupted the flow of $22 billion in federal education funds that go to the states, but the immediate impact to Alabama schools is not yet clear. State officials said that cuts would immediately impact Head Start programs in the state.

When The Star-News went to press, it was not clear though whether those programs that provide childcare and promote school readiness for 17,424 low-income Alabama children will be open today.

Here are some things everyone should know about the shutdown:

• Mail will still be delivered.

• All museums, national parks and their visitor centers will be closed – including the Smithsonian, the Statue of Liberty, Independence Hall and Alcatraz Island. In all, 368 parks, museums and zoos will be closed, per CNN. This does not affect the USS Alabama Memorial Park in Mobile, which is self-supporting.

• You still have to file and pay taxes, but the Internal Revenue Service will cease with all audits and processing of non-electronic returns. Call sites that handle responding to tax payers’ questions will also be suspended.

• If flying, you can still get where you’re going. Federal air traffic controllers, airport screeners and federal inspectors will still be on the job. And, applications for visas and U.S. applications for passports will continue and embassies will provide services.

• As for food stamps, Social Security, Medicare, there’s a lot to know.

Social Security and Medicare benefits will continue, and the USDA will continue food stamps for at least one month, according to CNN.

The Special Supplemental Nutrition Program for Women, Infants and Children, known as WIC, could shut down. School lunches and breakfasts will continue to be served, per NBC News.

• On VA benefits, all VA medical facilities and clinics will remain fully operational, including inpatient and outpatient care, and other special care services.  Veteran claims processing and payments in the compensation, pension, education, and vocational rehabilitation programs will also continue through late October.

• Those service men and women still on active duty will still get paid. President Barack Obama on Monday signed legislation to ensuring that for the military’s 1.4 million active duty personnel.

Members of Andalusia Middle School’s volleyball team, Builder’s Club and Peer Helper Club as they make their way past the... read more