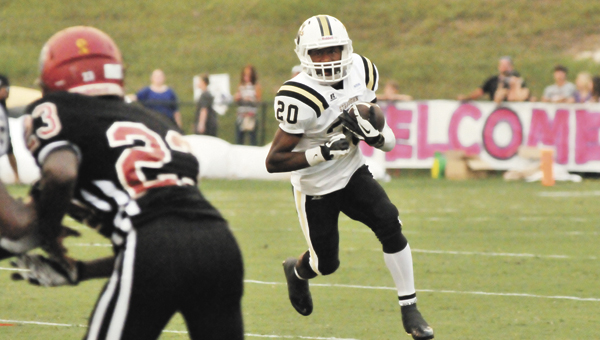 Straughn’s Daryl George (20) earned this week’s Player of the Week honors after rushing for 198 yards on 34 carries for the Tigers. | File photo

Daryl George was a bit tired after his game Friday night.

The Straughn junior running back rushed the ball 198 yards on 34 carries and scored one touchdown in the Tigers’ 34-8 victory over Elba last week.

George usually splits position duties with teammate and senior, Devin Scott. However, Scott went down with an injury during the third play of the game, forcing George to step into the running role.

“It was tiring I’ll you that,” George said. “I started thinking that I got to do it. I was doing it for Devin. I knew he was hurt and I knew it was his senior year, so every time I thought I was tired, I was thinking of him.”

George’s selflessness on the ground earned him The Star-News’ Player of the Week honors.

When Scott went down with the injury to his leg/ankle, where a player landed on it funny, George said SHS head football coach Trent Taylor didn’t have to tell him that he needed to go in.

“I saw Devin get hurt myself,” he said. “I saw the play when it happened. I was running on to the field to get (Scott), and I was like, yep, I’m about to have to take over.”

Luckily for SHS, George wasn’t nervous or anxious about being put in the spotlight.

“I kind of liked it,” he said. “I enjoyed it. I like getting the ball that much during a game.”

While it was fun to carry the ball that many times, George said it still was exhausting.

“They hit hard during that game,” he said. “I think it’s because they knew they were playing Straughn.”

George’s only touchdown came after senior quarterback Rollin Kinsaul connect with Javaris Samuel for one of his two passing scores.

At that point, the offense was clicking on all cylinders, the junior said.

“I was wanting to put them away for real,” George said. “I knew we had to put at least one more touchdown on the board to keep them away.”

When asked how tired he was during and after the game, George said at one point, he took a siesta on the ground for a minute or two.

“(At halftime) I was ready to get off the field, I ain’t gonna lie,” he said. “At the first quarter, I looked up at the scoreboard and it had like five minutes left, and I already had a bunch of carrries. I was like, this is going to be a long game. Usually, the games fly by for me, but that one was long.”

George is going to have to rest up because the fifth-ranked Tigers have a big region contest this week at home against Bayside Academy.

George is the son of Angela and Daryl George of Andalusia.

Andalusia, Straughn move up in poll

Andalusia and Straughn moved up in the Alabama Sports Writers Association football poll, which was released today. The Bulldogs (5-0)... read more