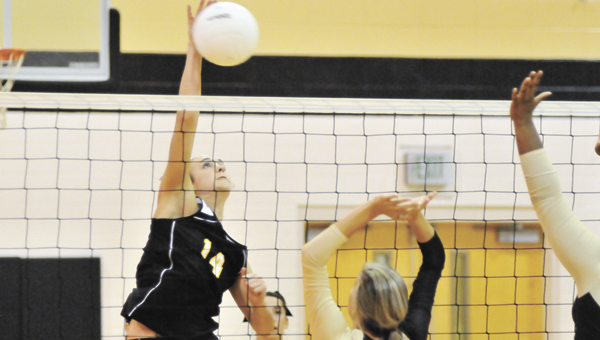 Opp powered through a strong Straughn serve-receive game and the Lady Bobcats came away with a 4-1 area victory Tuesday night in a loud Lady Tigers gymnasium.

Straughn didn’t back down, thanks to the aid of its student-body who showed up and showed out for the important area contest.

“It was too close for me,” Opp volleyball coach Christie Spurlin said. “Serve-receive killed us every time.”

What Spurlin was talking about was Straughn’s Jacie Williamson’s powerful and laser-like precision from behind the line.

Williamson helped lead the Lady Tigers on a 7-0 run at the end of the third set, and an 8-0 run at the tail of the fourth to keep OHS on its heels.

Williamson was matched by Opp’s Laiken Free, who led the Lady Bobcats with 18 kills from the outside corner.

The first time Straughn played Opp in Class 3A, Area 2 action earlier this season saw the Lady Tigers fall in a sweep to OHS.

“Opp’s got a great team,” Rodgers said. “I think we showed that we have a good team, too. We found a way to play out there.

“Hopefully, this will give us the right push for the rest of the season,” he said.

Rodgers said he was thankful for all of the students who showed up for the match.

“All I have to say is that it’s great to be a Straughn Tiger,” he said.

Opp (18-3) led 11-3 in the first set to cruise in the opener. Both teams went back and forth early and often in the second, but with Williamson and Free trading kills and a good defensive effort by both teams, the match was elevated to another level.

Late in the fourth, the Lady Tigers brought the game to 23-21. Straughn later led 24-23 on an Opp error, but the Lady Bobcats bounced back on a tip to tie it up 24-all.

“We hustled,” Spurlin said. “They were determined to win it.”

“They hit it so well,” Davis said about KHS. “We did a good job blocking them. That was the difference.”

Additionally, the Lady Eagles played with passion because teammate Krissie Herman was in attendance for the first time since suffering a severe concussion.

Straughn’s Daryl George (20) earned this week’s Player of the Week honors after rushing for 198 yards on 34 carries... read more