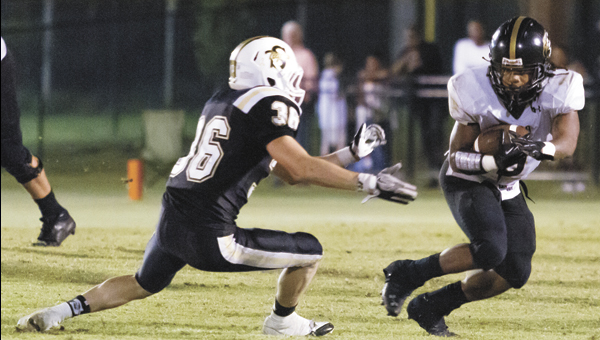 Plastered on the hallway walls at Straughn High School are pieces of paper with one word written on them — “Bayside.”

It’s Bayside Academy week for the home-town Tigers as they get set for a key Class 3A, Region 1 contest at home tomorrow night.

The Admirals (2-3, 2-1) enter the contest after a 27-24 non-region loss to Class 4A defending state champion UMS-Wright last week. Their other two losses have come to undefeated Charles Henderson and T.R. Miller.

SHS head football coach Trent Taylor said BA is similar to what it was last season. Straughn lost 27-17 in its 2012 game.

“Bayside’s got a really good football team,” Taylor said. “Coach (Phil) Lazenby and his coaching staff do a great job.”

Slater has the ability to throw the ball in space, which gives him another dimension, Taylor said.

Just last week, Slater found one of hi favorite targets in senior wide receiver Greg Wallace for a 10-yard pass in the losing effort against the Bulldogs.

“He has great hands,” Taylor said about the 6-foot-1 Wallace. “He’s made some catches on film in traffic you don’t expect to see high school receivers make. He’s just that good.”

Taylor added that in high school football, you try to take away what a team does best to get them to try to beat you another way.

With the Admirals, that isn’t so easy, he said.

“From one end of the spectrum to the other, they’re so darn good in this,” Taylor said. “It’ll be a challenge for our defense, which is certainly a part of our football team that’s been consistent all year long. They have their work cut out for them.”

“(Goe) is certainly somebody we’ve got to be aware of,” the coach said. “They’re very well coached. They’re where they’re supposed to be. You don’t fool them a whole lot. They make plays, and they gang tackle.”

When asked how a defense would typically line up against a pass-happy team such as the Admirals, Taylor said the Tigers are just going to follow their “game plan.”

“We know they’re going to make their plays from time to time,” he said. “The biggest thing from a secondary stand point is keep everything in front and live for another down, saying the same thing about our defensive front and linebackers.

“With the misdirection and all involved in their offense, it’s almost like playing an option team,” he said. “You’ve got to be very, very disciplined and assignment conscience. You’ve got to stay home because a lot of the time, the ball comes right back to you.”

Tomorrow night will start the second half of Straughn’s season, and Taylor said the players know how important these next four games are in the grand scheme of things.

In fact, Taylor said the coaches — like they tend to do before big games — have had the Bayside Academy game in their minds for a few weeks.

“You know, obviously from a coaching stand point, you’re always looking at film,” Taylor said. “Sunday afternoon, (SHS defensive coordinator) coach (John) Fussell had some things to go over with the kids. In the B-team game (Monday night), most of the coaches did some film study.

“I think we’re probably a lot a like our two teams,” he said. “We’re both cerebral-type teams. It’s obvious watching them that they know a lot about their opponent, learning those weaknesses and trying to exploit those weaknesses. The kids do a great job of executing the game plan. There’s no doubt they’ll certainly be well coached up.”

Kick off tomorrow night is at 7.