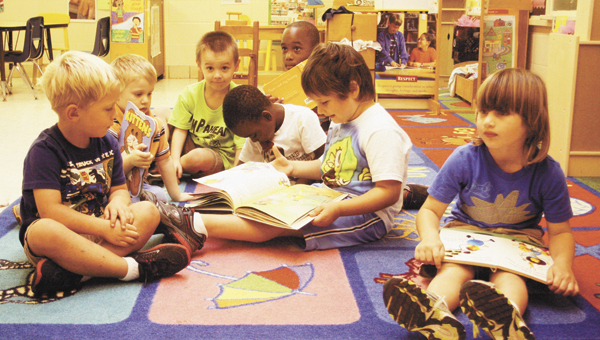 Above: Students at Andalusia’s Head Start will be able to continue attending the program in spite of the government shutdown Tuesday. Bottom: Students boogie to the music Thursday afternoon.

Andalusia’s head start program, and the 76 children it cares for on a daily basis, has not missed a beat in the wake of the partial government shutdown that took place Tuesday.

According to director Denise Davis, the organization is funded completely by the federal government, but works off a calendar-year budget, which will keep them funded through December.

“We have not had any problems (because of the shutdown),” Davis said on Thursday. “We’re hoping the shutdown government will be fixed by January. If it’s not we’re probably all in some trouble, but that’s the only way it would affect us.”

Despite dodging the effects of the shutdown, Davis said the program will be closed temporarily from Oct. 14 through Oct. 25.

“We are closing for the furlough, but that’s due to the 5.27 percent sequestration,” Davis said.

Davis, who had served as the head start director for 10 years, said the program offers daily care and school preparation for children ranging from newborns to four-year-olds.

“We have 76 children in five classes,” she said. “We focus on early childhood education, but we also meet physical needs like vision screenings and dental. We serve families and parents and we take care of the whole child, not just education.”

Davis said, while the furlough will cause an inconvenient closing, she is thrilled the shutdown will not impact the families who entrust the care of their children to the organization.

“We are totally federally funded,” she said. “There is no cost to the parent. We provide school supplies and everything they need here.”

Davis said the closure of the program later this month is the first time head start has been forced to close due to a furlough. She said, for parents who must have daycare, she is referring them to local churches that may have programs to help bridge the gap in child care.