Aiming for a win 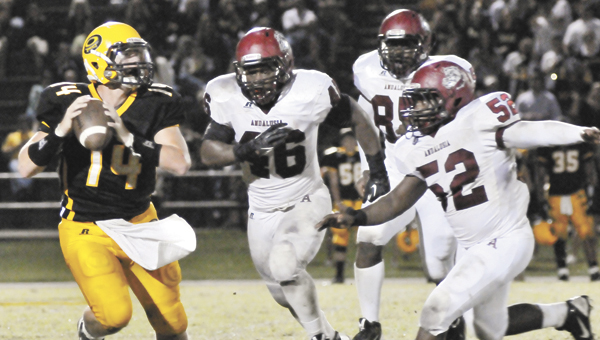 Andalusia’s not planning on letting another game get away from itself, especially tonight as it visits Clarke County in a key region contest.

The home-town Bulldogs haven’t forgot the 2012 result against CCHS, where they lost 9-6 on their homecoming night.

In last year’s loss, AHS head football coach Brian Seymore said the team “let (a win) get away from us.”

“They’ve got some tough kids,” Seymore said about CCHS. “We’ve got to go out there and execute the game plan on both sides of the ball. If we do that, then we’ve got a great opportunity to win.”

Sixth-ranked Andalusia (5-0, 3-0 in Class 4A, Region 1) enters tonight’s game after defeating Opp 43-26 in an always-thrilling rivalry contest. AHS fell behind 20-12 at halftime, but went on to score 31 unanswered points in the second half on its way to win victory.

CCHS is similar to Hillcrest-Evergreen, a team that Andalusia beat 29-21 in week three, Seymore said.

“They’re a very physical team that can run a little bit, just like Hillcrest,” he said. “They’re fast on either side of the ball. They’re kind of a Wing-T, downhill running football team.

“They like to establish the line of scrimmage, and they like to pound that ball at you and control the clock to keep the offense off the field,” he said.

Leading the CCHS offense is quarterback Matthew Harvey. Harvey has the ability to mix it up a bit and likes to run.

In the back field, CCHS has fullback Cornelius Coates, who is the “go-to guy,” Seymore said.

“He’s going to get his touches,” Seymore said. “They try to establish them inside and out. They will take their shots deep. When they do that, they try to get the ball to (wide receiver) Xavier Burden. He’s a tight end, receiver; a big tall kid.”

Every one of the same athletes were on Clarke County’s team last season, the coach added.

“They’re the leaders of the offense,” Seymore said. “They’re a smash-mouth football team. We’ve got to do a good job up front. We’ve got to get them in some third-and-long situations and get some pressure on the quarterback. The main thing we look forward to do is eliminating those big plays on defense, and do a good job tackling.”

During the Opp win last week, Andalusia converted on one of seven extra-point or 2-point conversion attempts, and even got a punt blocked to give the Bobcats a touchdown on the fumble recovery.

“We spent a lot of quality time on special teams this week,” Seymore said. “We’ve got to do a better job of kicking those extra points. We only converted on one (last week). We left a lot of points on the field. The blocked punt was a missed assignment.”

The Bobcats even were successful on an onside kick, an area AHS has also suffered in this season with a 0-3 record on attempts.

“We changed the personnel up a little bit,” Seymore said about the “hands team.” “We failed to convert two (one last week and the other against HHS) on hands team. That’s very important when you’re trying to seal the deal.”

With all of this going on for Andalusia, an additional stresser is the importance of the game. AHS can clinch a berth in the playoffs if it wins tonight.

“I think it’s huge,” Seymore said about the game. “It pretty much clinches a playoff berth, but you’re fighting still for home field advantage. That in itself would be a relief if you wrap that up. This is a big game for the simple fact that it’s the next region game.”

Seymore added that he doesn’t think this going to be a “revenge” game from last year.

“Our goal all year this year is to try and go 1-0 every week,” he said. “That’s the ultimate goal. We’ve had a good, physical week at practice. We’re still trying to play four quarters. We’re trying to put four quarters together. I think we can continue to get better as a football team.”

Kick off tonight in Grove Hill is at 7.

To fill the roles, if needed, Justin Scherzinger and O.T. Green will step in their spots on the line.

Opp will be hosting its fifth home game of the season tonight as the Bobcats are playing Southside Selma at... read more