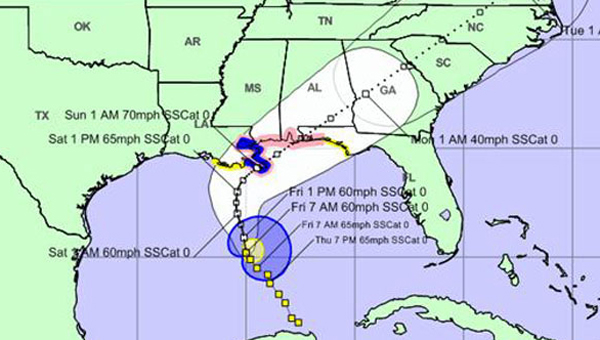 If Tropical Storm Karen remains on the projected path, Covington County should be very wet by tomorrow afternoon.

On Friday, the National Hurricane Center was predicting two to four inches of rain over the weekend with four to eight inches of rain possible for areas near the coast.

The wind impacts were predicted at 40 to 50 miles per hour.

When The Star-News went to press Friday night, a tropical storm watch was in effect from  east of the moth of the Pearl River to Indian Pass, Fla.

Locally, rains are expected to begin this afternoon and evening, with the strongest part of the storm hitting Andalusia between 9 a.m. and 10 a.m. on Sunday. Karen is also expected to spawn tornadoes.

Andalusia Mayor Earl Johnson held a meeting of department heads Friday afternoon to make sure all city departments were prepared to respond to potential emergencies. Already, generators were in place to keep the water and sewerage systems working. As well, the Andalusia Police Department can power its building with a generator.

Employees are on standby this weekend in case the power goes out, water services need attention, or roads need to be cleared.

“The biggest thing is I hope people understand is we know what’s going on and we’re on it,” Johnson said. “The first thing, will be to get power at the hospital and wastewater treatment plant operational.

“Our employees need to understand, people don’t know we’re taking care of business,” he said. “We need to let them know we will get to them as we can.”

• To secure hobos near a wall so they won’t blow away.

• In the event of damage, to stay at home so that workers may clear roads and remove live power lines.

• Not to drive into moving water if streets are flooded.

Covington Electric also announced Friday that its line crews are on stand-by in preparation for Karen.

Scattered power outages in the CEC service territory could occur depending on the storm’s track, and CEC crews will work to restore power as quickly and safely as possible. Both CEC and Andalusia Utilities said in the event of widespread power outages, they will call for assistance from unaffected cooperatives that can assist through mutual aid agreements to restore service more quickly.

“Residents and businesses along Alabama’s coast should monitor weather conditions and be prepared for whatever this tropical storm may bring,” Bentley said. “By declaring this state of emergency, I am mobilizing the resources our communities need as the storm approaches.”

Alabama National Guard members and emergency response agencies will be on alert because of the state of emergency, Alabama EMA Director Art Faulkner said.

And despite the federal government’s shutdown, some FEMA employees went back to work Friday in preparation for the storm.

Deadline for fair entries next week

Residents have one week to get entries in for this year’s Kiwanis Covington County Fair. Keith Stephens, chairman of registration,... read more