Giving credit where it’s due 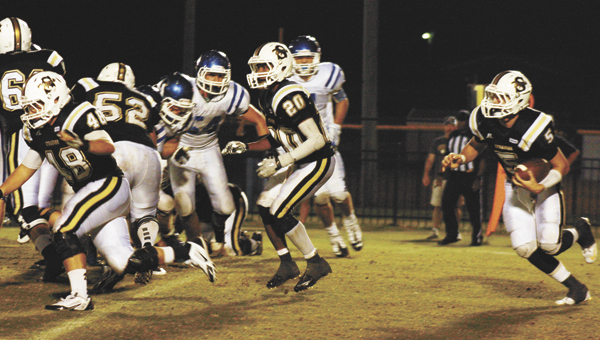 Straughn’s Rollin Kinsaul (5) runs the ball as the offensive line and other players give him some room Friday night. | Blake Bell/Star-News

Early Saturday morning, Straughn junior quarterback Rollin Kinsaul gave a shout out on Twitter to a big part in the Tigers’ 40-22 region victory over Bayside Academy the night before.

Behind an experienced offensive front last week, Kinsaul was able to rack up 112 yards on 12 carries and scored two touchdowns on the ground, and went 6-of-11 for 65 yards and a touchdown in the air.

Kinsaul’s performance for SHS earned him The Star-News Player of the Week honors.

The junior QB, who moved to offense from linebacker, said the credit goes to the big men up front.

“I feel like that was one of the best games our offensive lines has had all year,” Kinsaul said. “Our defense creating four turnovers, that helped us out getting the ball in our hands and getting it in the end zone.

“We put the ball in the end zone and drove it down the field, and I was pleased with the way our offense played,” he said.

Kinsaul’s first touchdown came on a 13-yard pass to Brady Page with 1:28 left in the first quarter to put the Tigers ahead 7-0. His rushing TDs came from 1 and 32 yards out in the fourth quarter to give SHS its 40-22 lead with two minutes to go.

While the offensive line — which is comprised of Dalton Watson, Conner Livings, Zack Riley, Brock Watson and Page — gave Kinsaul great protection and time to make passes, the rest of the Tigers’ offense contributed, too, the quarterback said.

Straughn’s game against the Admirals was a big contest for the Tigers.

Kinsaul said he wasn’t nervous at all about the game because the team, as a whole, prepared for it a lot and also the coaches were excited about the game.

Getting ready for the season also took a lot of time and work for Kinsaul.

During the summer, Kinsaul would work with former SHS standout and Huntingdon quarterback Ryne Taylor.

When Taylor wasn’t working out with the Hawks in Montgomery, both would get together to throw the ball around and talk shop, Kinsaul said.

“We had some talks about being a quarterback,” he said. “Going from linebacker last year to quarterback this year, you were kind of the chaser on defense. Now you’re the chasee.

“It was a big change from linebacker to quarterback, but (Taylor) was one of the main guys to help me get the mind set of a quarterback,” he said.

Kinsaul said he learned that a QB has to be calm no matter the situation on the gridiron.

“It’s a different role than linebacker,” he said. “On defense, your intensity can be up. I have a bracelet I wear and it says ’68 Degrees and Breezy.’ What that means is that you’ve got to stay cool and calm all of the time as a quarterback. You can’t get too high. Once you do something, like throw a pick, you can’t get too low. You’ve got to stay calm the whole time.”

Kinsaul will be taking his coolness to Excel this week as the Tigers take on the Panthers in region action.

Rollin is the son of Benjie and Jan Kinsaul of the Straughn Community.

Not taking Excel for granted