Not taking Excel for granted 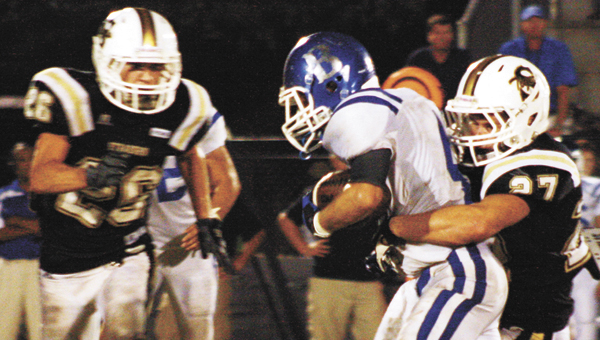 The fifth-ranked Tigers travel to play the Panthers on Friday in their seventh week of the regular season, and fifth week of Class 3A, Region 1 play.

Taylor said Excel led for a short time against Bayside Academy and T.R. Miller in earlier games this season. The Admirals and TRM ended up winning their games 51-22 and 54-14, respectively.

“(Panthers head football) Coach (Richard) Anderson is doing a great job over there,” Taylor said. “It’s not one of those things that’s going to turn around over night. The thing about it is they’re winning the games they’re supposed to win and they’re going to win one nobody expects them to win.

“That’s what makes them so scary,” he said. “They’re, from a physical stand point, the biggest football team we’ve played against this year.”

Not only do the Panthers (2-4, 0-4) have big offensive and defensive linemen, but they also have big players in other positions.

Excel’s only wins this year have come against in-county rivals and non-region opponents J.U. Blacksher and Monroe County. JUBHS is in Class 1A, while MCHS is a Class 4A school and is in the same region as Andalusia.

Another key to Excel that Taylor said he observed is that EHS plays players on both sides of the ball. With the weather turning a little cooler recently, that tends to yield better results, especially now in the second half of the season.

” If we were playing them last week, or at anytime before, then that would certainly be a bonus for us,” Taylor said about the warmer weather. “That’s what you see is that they play really close for a half and get kind of worn out.”

Clinching a playoff berth last week was great for the team, but the Tigers certainly aren’t satisfied because they still have goals they want to accomplish this year, the coach said.

“Really and truly, you don’t get a whole lot of second chances in life, but it was like a second hance for our kids,” Taylor said about winning over the Admirals. “While things certainly woked out well last year, we would’ve much rather been at home last year for the first round. We still have an opportunity and the goals to win the region championship and host the first round playoff game are still intact.”

All season, the Tigers were searching for their identity to see what kind of team they had.

Last week gave Taylor a big indication of where they are.

“Friday night might have been the most complete football game we’ve played in a long time,” Taylor said. “I can think of only a few break downs that we had. It wasn’t a perfect ball game, but it was a complete ball game, and I think our focus was where it needed to be and our execution needed to be.”