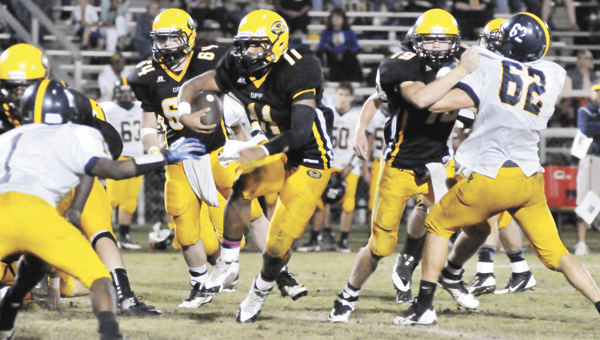 Opp’s Ty White (11) rushes for a gain late in the Bobcats’ win over Cottage Hill Friday night. White finshed with 159 yards on seven carries, rushed for one touchdown and threw for another. | Andrew Garner/Star-News

Opp did its job in a 40-8 rout over Cottage Hill on its homecoming on Friday night.

The Bobcats’ speed early on proved too much for the Warriors as they took a 26-0 lead into halftime.

“We did some things well,” Whigham said. “We knew that if we would execute and not turn the ball over (on first team) — I don’t think we had a turnover. We felt like we had an overall team speed advantage on them. That played out earlier in the game.”

Whigham was right as Ty White got going early, rushing for 109 yards on just two carries and scoring an early 65-yard touchdown to give OHS a healthy 14-0 lead. White finished the night with 159 yards on seven carries.

With this victory, the Bobcats improve to 4-3 overall, and 3-2 in Class 3A, Region 1. The Bobcats have an important game next week against W.S. Neal, who lost 34-26 to Bayside Academy last night.

Whigham said if Opp wins, it will be “OK.”

Opp scored its first TD of the night on a 12-yard scamper from quarterback Ethan Davis with 7:15 left in the first quarter. With the point after attempt, the Bobcats led 7-0.

After the Warriors punted on their next possession, White scored his 65-yarder with 2:30 left in the first quarter.

To start the second quarter, the Bobcats executed a 11-play, 79-yard drive that was capped by a 8-yard TD rush from Davis for his second score of the night. OHS took a 20-0 lead with 6:16 left in the first half after an unsuccessful PAT.

The Bobcats defense held CHCA to a three-and-out.

From 40-yards out, the Bobcats put together a half-back, 40-yard pass from White to Justin Adkins with 1:00 left before halftime.

Coming out in the second half, the Bobcats scored an early touchdown to make it safe for the second-stringers to get some playing time. In fact, Whigham said all players got to play last night.

Ta Bonham, who finished with 42 yards on eight carries, rushed in from 14 yards with 8:44 in the third, and with the extra point, the Bobcats led 33-0.

Opp quickly got the ball back when Cottage Hill give up the ball on the ensuing kickoff.

The Bobcats recovered at the Warrior 41, but couldn’t drive in for the score. Fortunately, the younger Opp players ate up some clock to give the ball back to CHCA with 3:20 left in the third.

CHCA was stopped at its own 25-yard line after the Bobcats got the Warriors’ drive to fourth-and-21.

The Warriors got the ball back after a fumble with 8:17 left in the fourth, and took advantage as their quarterback, Justin Helms rushed in from 7 yards. with 4:30 to go in the game. Brendan Hall rushed in from 3 yards for the 2-point conversion to bring it to 33-8.

CHCA recovered an onside kick, but an illegal touching call gave the Bobcats the ball.

The Bobcats scored their last touchdown of the night when Onterrio Jones rushed in from 7 yards with 1:19 left in the game.

On offense, the Warriors got some passing plays in, but the Bobcat defense got the better end when Davis intercepted a pass to effectively end the game.

Whigham said there’s still some work that needs to be done in order to get ready for W.S. Neal next week, and Straughn the week after.

“We’re still making a few mistakes,” the coach said. “We’ve got two really big weeks ahead of us. Hopefully, we can take this film and go back and look at it, and see some things that we’re doing wrong and try to get them corrected in the next couple of weeks.”

Jones finished with 54 yards on six carries for OHS.

The Straughn High School Tigers escaped a road game against Excel with a win Friday night in what head coach... read more