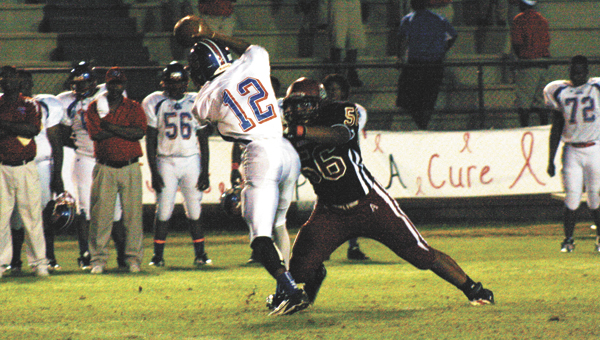 The Andalusia High School Bulldogs remain unbeaten at 7-0 and have clinched a home-game start to the 2013 playoffs after a 27-6 region win over the Wilcox Central Jaguars Friday night at Bulldog Stadium.

Even with the big win, head coach Brian Seymore said his team has plenty of room to improve before next week’s region showdown with No. 2 UMS-Wright.

“I think we were looking ahead a little bit,” Seymore said. “We’ve got to go back and get some things worked out before we play UMS-Wright.”

The Bulldogs got off to a fast start against the Jaguars, scoring on the first play of the game as James Montgomery returned the opening kickoff 95 yards for a touchdown.

The Bulldogs enjoyed stellar field position for the majority of the first half, but were only able to find the end zone once more before halftime.

On their first possession of the game, the Jaguars found themselves facing a fourth-and-nine at the Bulldogs’ 24-yard-line. WCHS was able to hit a receiver in the end zone on fourth down, only to see the play called back as the quarterback stepped across the line of scrimmage before firing the pass.

On the ensuing drive, Bulldogs quarterback Michael McCalman took the offense into Jags’ territory with a long run, before finding Devante Jackson with a pass down to the 11-yard-line.

With a new set of downs, the Bulldogs drove to the 1-yard-line, but were denied a fourth-and-goal shot at the end zone.

Early in the third quarter, the Bulldogs once again found themselves with great field position, beginning their drive at the Jags’ 20-yard-line.

McCalman found Jackson once again, this time for a 20-yard touchdown pass in the corner of the end zone. The score put the Bulldogs up 14-0 with 11:08 left to play in the second quarter.

The Jags found their lone score of the night before the break, as running back Jarvis Ross broke away from defenders for an 80-yard touchdown scamper to pull within eight points of the Bulldogs’ lead.

The teams traded short series and punts through the third quarter, but seconds into the fourth, the Bulldogs found new life with a 37-yard touchdown pass from McCalman to Montgomery to take a 21-6 lead.

The Bulldogs sealed their win Friday night with a 5-yard run from Montgomery with 3:26 to play in the game.

Despite the 27-6 win, Seymore said he is looking for more consistency from his team.

“We got the job done,” Seymore said. “I wish we’d come out with a little more heart and little more get up about us.”

Seymore said he will look for that out of his team this week before their tough test against UMS-Wright.

“We’ve got to do all of the little things right next week,” he said. “From special teams to offense and defense. We can’t miss tackles. We can’t miss assignments on special teams and we have to be flawless on offense to try and put the ball in the end zone and score some points.”

Montgomery carried the ball 11 times for 64 yards and two touchdowns, while Jackson caught four passes for 54 yards and a touchdown.

Kick off next week against UMS-Wright is at 7 p.m.