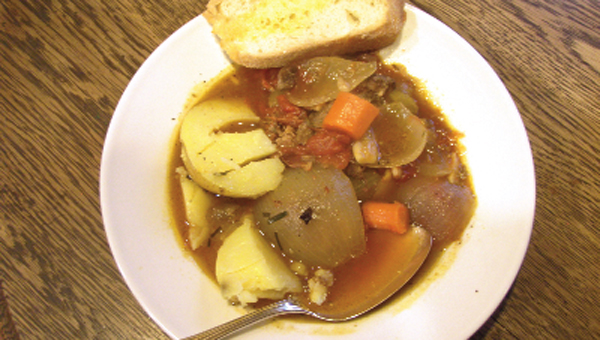 We have just returned from our annual Devon meeting, which was held this year in western North Carolina. The farm visit was to the Lenoir Creek Farm of the Tranthams, operating since 1807 and raising Devon since 1849 when the cattle were brought to North Carolina by Capt. Thomas Lenoir from Maryland.

The Tranthams have been on this farm and raising Devon for 25 years, and they have an amazing herd. Devon have been in America since the 1620s, and the breed used to be prevalent before the feed lots that began after WWII.  They are still a recovering breed according to the Rare Breeds Conservancy.

This year is a banner year as the two Devon organizations in the United States combined forces as Red Devon USA and plan to aggressively promote the breed as “Gourmet Beef on Grass.”  Angus has done a good job of branding. Devons are at the forefront of eating healthy with grass-fed, grass-finished beef. If they are fattened on grass and killed without stress, the meat is also tasty and tender. Grass-fed beef has less total fat, increased beta-carotene, vitamin E, B vitamins, thiamin and riboflavin, minerals such as calcium, magnesium and potassium, total omega-3s with a healthier ratio of omega-6 to omega-3 fatty acids.  The meat is higher in CLA, a potential cancer fighter, and higher in vaccenic acid which can be transformed into CLA.

Grass-fed beef is becoming more available in the grocery store and in the future you are going to see grass-fed Devon available as well.

We ate the Trantham’s Devon all weekend as hamburgers, roast beef, meat loaf and beef stew. The chef at the convention center who cooked the Devon beef said it was some of the finest beef he had cooked. So different from all the other commercial beef he had been using. It does have to be cooked somewhat different since there is less fat.

We did have good beef stew at the meeting, but I did not get the recipe so came home and found one of my own. I will say that for dessert one nice lady had prepared 18 different pound cakes. Now, that was a sight and one could hardly decide which one to try. Several people tried quite a few. Since they had had such good beef, a little sugar would not hurt!

This recipe is taken from The River Cottage Meat Book, by Hugh Fearnley-Whittingstall. This book has all you need to know about meat.

This stew is the kind of simple stew that exemplifies slow cooking at its best. In a couple of hours you can have produced something that is greater than the sum of its parts.

4 garlic cloves, bashed with the side of a knife

A couple of sprigs of thyme

Cut the beef into larger-than-you-would-think, not-too-boringly-square pieces, trimming of some, but not all, of the fat as you go.

Heat the olive oil in a large, heavy-based frying pan. Fry the bacon and the pork or bacon rind until lightly browned (but not crisp). Remove with a slotted spoon and place in a large casserole. In the same oil, brown the beef, in two or three batches, and then transfer to the casserole.

Deglaze the frying pan with a little of the wine, then add the rest of the wine, heat until it boils, and pour it over the meat. Heat up the water or stock in the same way and pour that over too—enough to cover the meat by a good ¾ inch.

Cut the onion in half and stick each half with two cloves, then add to the casserole along with the garlic, herbs, orange zest, carrots, celery and tomatoes. Season, going easy on the salt for the time being (remember that the bacon will give up salt to the pot). Bring to a very gentle simmer and maintain it, either on the stove top over a very low heat or in the oven at 250 degrees, for three to four hours, until the meat is completely tender. At this point the stew can be cooled and kept in the fridge for a day or two. It will get better as it sits.

To serve the stew, make sure it is thoroughly hot. Remove the onion, unless any of your guests fancies half an onion (I leave it in). Ladle your stew into deep plates or wide bowls, with plenty of juice (which in this stew is meant to be thin and copious, rather than thick and reduced). You could serve it with potatoes-boiled, baked, or mashed. Or it could be served with macaroni or some other noodly pasta, precooked and stirred into the daube a couple of minutes before you ladle it out.