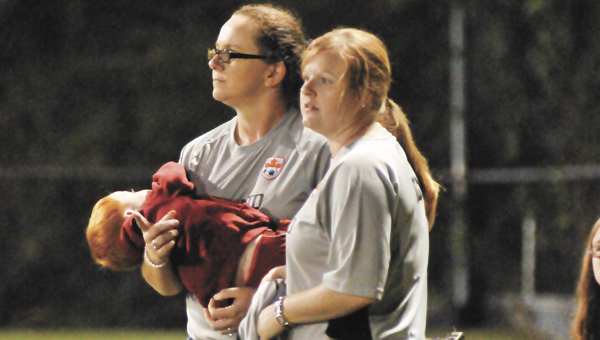 For a little less than a month, the tag-team moms have coached the 7-to-8-year-old Toronto team and wouldn’t trade the experience for anything else.

“We’ve had the most fun this year,” Kimbril said as her voice rose an octave.

Kimbril and Williams have been watching their sons — Grant and Courtland, respectively — play soccer since they were involved in the lower leagues, and this season, both got into coaching because the league didn’t have enough coaches.

“I volunteered and volunteered Brooke,” Kimbril said. “My son has played since he was 4, and we wanted to make sure they had a fun time.”

The duo did as much research as they could into the sport and broke it down to the “kid level,” Kimbril said.

“There’s actually a soccer book for dummies,” she said. “We knew the basics from watching their practices, but they have rules, which we were not used to. The referees are wonderful to work with. It’s been really good.”

Williams said her experience has been great working with Kimbril on the sidelines.

“It has been fun,” Williams said. “We have thoroughly enjoyed it. Luckily, we’ve got a great set of athletes. It’s been a good learning experience.”

The Tornadoes have won every game this season; however, one game was called due to weather.

“We don’t count that as a loss,” Kimbril quipped.

Because both were new to the sport, they learned quite a lot this year, not only about the the rules, but a little bit about themselves.

“We learned that we’re both competitors,” Kimbril said. “We want our little boys to be the best. We want them to have fun, but learn a little bit, too.

“When they go on to their next team, we want to make their next coach see that they’ve learned something,” she said. “We’re actually really sad that we have only two games left.”

Toronto’s last two games will be held Tuesday and Thursday.

When asked if they’d be willing to coach another team again, Kimbril and Williams said they would under one condition.

“We feel like we’re a team,” Williams said. “I have an older son, and she has a younger son, so we’re only together every other year.

“It has definitely been fun, but we’d like to do it together,” she said. “We kind of complete each other as a team.”