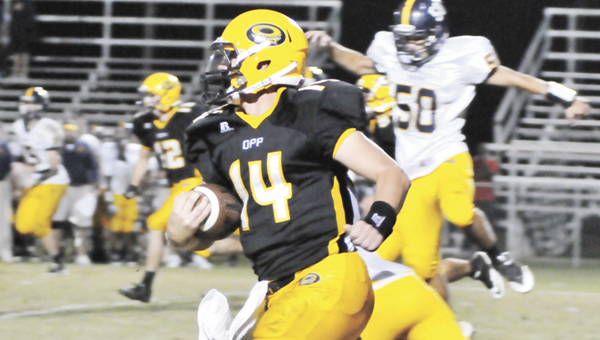 This is do or die time.

However one might say it, Opp’s got a must-win game Friday night against W.S. Neal for a chance to play in the 2013 postseason.

Bobcats head football coach Jack Whigham said as much on Monday, when his team was about to hit the practice field.

“We’ve got to win to get in the playoffs,” Whigham said. “They have an outstanding team. They’re a very fast, physical team. Last year, we played them on their homecoming and they were coming off a big win against Bayside (Academy).

The Bobcats improved to 4-3 overall, and 3-2 in Class 3A, Region 1 with their 40-8 homecoming win over Cottage Hill last week.

WSN has the same record and has beaten the same region opponents Opp has as well in Excel, Southside Selman and CHCA. The only difference is that the Eagles lost 21-8 to Straughn in week two. OHS faces Straughn in its last region game of the regular season next week.

W.S. Neal’s go-to guy on offense is sophomore running back Quenton Samuels, who has rushed for 1,769 yards on 183 carries and scored 17 touchdowns so far this season.

Whigham said not only does Samuels run well, he’s “hard to catch.”

“He’s just got tremendous speed,” the coach said. “He’s very hard to catch. They have a big offensive line and will continue to pound at you. They don’t throw the ball very much.”

But when the Eagles do, a good sophomore quarterback in Malcolm Hawthorne takes the reigns.

Defensively for WSN, there’s senior linebacker Michael Williams, who has 51 tackles this season.

Fortunately for Opp, the Bobcats have plenty of weapons to go to on offense, namely freshman running back Orlando Lacey, who is leading the team with 505 yards on 63 carries and four touchdowns. Sometimes, when needed, Lacey will throw the ball, and as of last week, in a game he didn’t play in, he is 16-of-27 for 195 yards and two TDs.

Additionally, the Bobcats have Ethan Davis at QB, who also plays in the secondary on defense. Just last week, Davis returned an interception for what was going to be a 99-yard touchdown return, but ended up being 44 yards because of a penalty to end the game.

A main focal point this week for OHS is getting better, Whigham said.

Opp’s Ty White rushed for 159 yards on seven carries and was accountable for two touchdowns to earn this week’s... read more