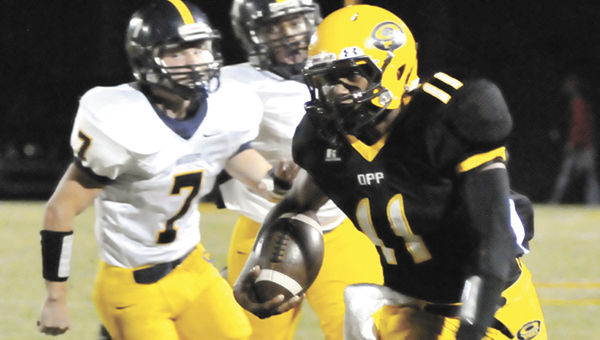 Opp’s Ty White rushed for 159 yards on seven carries and was accountable for two touchdowns to earn this week’s Star-News Player of the Week honors. | Andrew Garner/Star-News

The sophomore running back who also contributes at middle linebacker on defense, racked up 159 yards on seven carries and accounted for two touchdowns in the Bobcats’ 40-8 thrashing of Cottage Hill for their homecoming.

White’s performance on the field, which included scoring a 65-yard TD rush and throwing a 40-yard scoring pass, earned him The Star-News Player of the Week honors.

It didn’t take long for White to let spectators know that he was going to have a good night.

On his second carry of the game, White followed the block of fellow teammate and wide receiver Darien Hinton, and scampered for 65 yards and his first touchdown. After reaching the end zone, White had 109 yards on the ground.

That White did because on the play, the 6-foot, 208-pounder had to juke to his left and found plenty of grass for the score.

White’s first score came with 2:30 left in the first quarter to give the Bobcats a healthy 14-0 advantage with a successful extra point attempt.

OHS went up even more before halftime with White’s second touchdown.

With 1:00 left in the first half, White connected with an open Justin Adkins on a half-back pass to put the Bobcats ahead 26-0 at the break, all but sealing the game.

White said the pass was just a simple “reverse” play.

“It was our first week practicing that,” he said. “We went through it about three or four times during the week.”

A lot of the credit for his success goes to the offensive line, White said.

“Our line, they stayed on their blocks and opened up seems for me,” he said. “At the beginning of the game, they said they were going to open up the seems and I told them I’d hit them hard.”

White has been playing football ever since he can remember and considers it his sport.

The Bobcats have a big game this week at home as they host W.S. Neal out of East Brewton.

OHS needs to win this game in order to gain a berth to the Class 3A state playoffs.

White said the team needs to put in a good effort this week at practice.

“We’ve got to get better at practice,” he said. “We’ve got to play low this week. If we play high, then we’ll lose the game pretty bad. We’ve got a big chance to win.”

A big chance to win also can mean adding a little pressure at practice.

White said it’s going to be important that the team practice well this week.

White is the son of Tannisha Lane and Tyrome White of Opp.