Playing for a region title 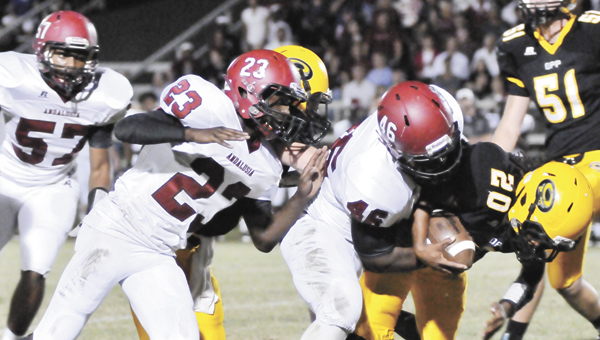 Andalusia is looking for its first region championship since 2011 as the home-town Bulldogs play host to top-ranked UMS-Wright tonight for all the marbles at its municipal stadium.

To have the opportunity to play for the Class 4A, Region 1 feels pretty good, AHS head football coach Brian Seymore said.

“I’m happy with the position that we’re in,” Seymore said. “It’s a great opportunity for our kids, our coaching staff and this community.

“UMS is probably your measuring stick and standard for 4A football right now,” he said. “They’ve been pretty solid, year in and year out. They’re multiple state champions, and they’ve set the bar. I think that’s what a bunch of other schools are chasing. We’ve got a grand opportunity in front of us.”

UMS-Wright head football coach Terry Curtis, who is chasing back-to-back state championships this season, also said this game will be a good gauge to see where his team is going into the playoffs.

“In the playoffs, you always have to go on the road at least once in a hostile environment,” Curtis said. “We need to see that type of playoff atmosphere.

“We have been on the road a couple of times but not against the team the caliber of Andalusia. We need to see where we are. Win or lose, I think it will really help us getting ready for the playoffs.”

Andalusia (7-0, 5-0) enters this week’s game after a 27-6 assault over Wilcox Central last Friday night. UMS (6-1, 5-0) won its sixth straight game last week over Clarke County after falling to Class 6A McGill-Toolen in week one.

UMS is led by Southern Miss commitment Gunner Roach at quarterback. Roach has amassed 1,279 yards and eight touchdowns this season. Jaylon Jones is his primary target. Jones has 726 yards and four TDs so far this year.

Behind Roach and who has gradually come back from an ankle injury is junior running back Troy Dixon. Dixon has rushed for 670 yards and 12 touchdowns.

What makes UMS such an offensive threat is its balance attack in the running and passing games. The Mobile Bulldogs have racked up 1,359 yards on the ground, and what Roach has compiled this season.

Seymore said it all starts with Roach on offense.

“He can make all the throws, he can hurt you with his feet,” the Andalusia coach said. “He does a great job running their offense. He’s also got the luxury of turning around and handing it off to Troy Dixon, who is an exceptional athlete himself.”

When asked what sticks out to him the most about Roach, Seymore said through film study, the quarterback stays calm in adverse situations, much like UMS did when it faced a big deficit to Thomasville.

“He stayed calm, he stayed under control and he made all of the throws he needed to, even under a lot of pressure,” Seymore said. “It’s like he’s got that football savvy. He just has that knack for making things happen when they need it the most.”

So far this season, Andalusia has allowed an average of 16 points per game, compared to UMS-Wright’s 22. Head to head, Andalusia is 0-9 against UMS.

A primary goal for Andalusia’s defense this week is to first and foremost, stop the run to put UMS in situations where it has to deal with long downs. When a team stops the run, then it opens up the passing game, which is always a concern when you’re facing a quarterback of that magnitude, Seymore said.

Additionally, bringing pressure without using too many players is also key, Seymore said.

“We can’t let (Roach) back there and set up a throw, or he’s going to pick us apart,” he said.

Throughout this season, Andalusia hasn’t gotten off to good starts in a lot of its games.

Seymore said there hasn’t been a game where he thinks the team has played its best game.

“I think our kids, of course, we’d love to come out and play well from the start,” he said. “It’s something we haven’t done well all year. Honestly, as a team, I feel like we haven’t played our best game yet. Hopefully, we can play it (tonight).

Colton Elmore will be back in the line up this week after he suffered a high ankle and achilles sprain earlier this season. Additionally, Jackie Woods and Morris Calloway, who are defensive linemen, are listed as probable for the game.

Seymore said it’s going to be an exciting day and is asking for all the fans to come out, dress in white and support the team.

“We’d love for people to come out and support us,” he said. “We want a great turnout and a lot of people cheering for these guys. It’s an opportunity for them to win a region championship and beat UMS for the first time in school history.”

Kick off tonight is at 7.

Those who haven’t noticed, the Florala Wildcats and their head coach Bubba Nall are excited about tonight’s game at McKenzie.... read more