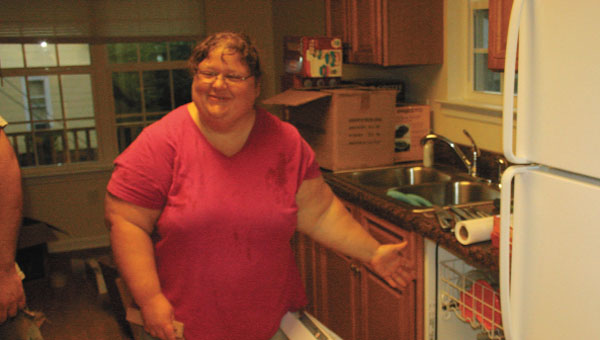 Tammy Sanford shows off her new kitchen in a home built by Habitat for Humanity.

Tammy and Andy Sanford are going through some big changes in their lives. In March, the couple said “I do,” and Thursday they unlocked the door of their new home in Andalusia for the first time as its owners, thanks to help from Covington County’s Habitat for Humanity.

Dale Pancake, president of the Habitat for Humanity board, said Andy and Tammy have worked hard, putting in their “sweat equity” at other Habitat projects in exchange for the construction of their new home in Andalusia.

“It’s going to be a real blessing for us,” Tammy said. “I work at the Head Start here and just saving the gas money driving from Florala will be big.”

Tammy said she first became involved with Habitat for Humanity at the recommendation of a friend.

“I got involved about three years ago,” she said. “I filled out an application at the urging of a friend. I did my sweat equity cutting grass and things like that.”

In 2011, Tammy and Andy met, and two years later they are preparing to move their wedding presents into their new home.

“It’s just been such a blessing knowing (the home) was sitting here,” Tammy said.

The completion of the Sanfords’ home marks the fourth project Habitat has finished in Covington County, and Pancake said new projects are on the horizon.

“We’ve committed to build one a year,” Pancake said. “This is our fourth and we broke ground Tuesday on number five.”

And Tammy said she and Andy’s “sweat equity” will continue with Habitat’s newest home.

“We want to help with theirs too,” she said.

“(Tammy and Andy’s home) is our first Energy Star home,” Pancake said. “We’re going to try and build to that standard from now on.”

For more information on how to become involved in Covington County’s Habitat for Humanity, call 334.222.0827.