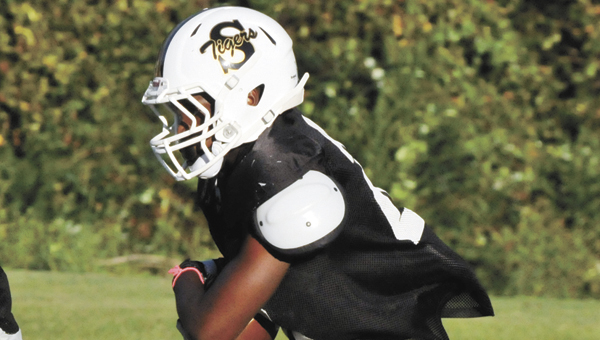 Straughn will take on third-ranked and undefeated T.R. Miller tonight for a shot at the Class 3A, Region 1 title. | Andrew Garner/Star-News

All of this week’s hoopla has finally died down and now it’s time for some football as Straughn travels to Brewton tonight for a chance to win a region title over T.R. Miller.

For seven weeks this season, both Tigers teams have battled in regular season and Class 3A, Region 1 action. SHS and TRM are undefeated in the region at 5-0.

Just the other day, SHS head football coach Trent Taylor reminded his players of how unique an opportunity they have tonight.

“I told our kids (Monday) that I don’t think you realize that there are not many teams who are playing a game like this at this point in the season,” Taylor said. “It’s funny how the region play stuff works out. There are a lot of teams who have it sewn up at this point. To have two teams going into week eight that don’t have a region loss, it’s a pretty special deal right there.”

Defensively, it’s another story. SHS has only allowed a total of 69 points, compared to TRM’s 112 for the season, averaging nine points per game.

Additionally, fifth-ranked Straughn (6-1) has won only two of its last nine meetings in the history of the contest.

The last three meetings saw an average point differential of seven between the two teams.

TRM squeaked by with a 19-17 victory over Straughn on a late touchdown run with time dwindling down last season. In 2009 — the last time SHS won a region championship — the local Tigers won 28-21.

Taylor said on film, this is the most “physical” T.R. Miller football team he’s seen, even more so than last year.

“They were much more physical defensively than we were offensively,” the coach said about last year’s game. “They came out on their own and hit us in the mouth.

On the ground this season, TRM (7-0) is led by Dominique Jackson — who scored the late TD to win the game last year — a junior running back who has racked up 637 yards on 57 carries and scored 10 touchdowns. The Coleman brothers — Kameron and McHenry — are also big run threats as both have averaged 9.65 yards per carry, per game.

In the air, TRM junior quarterback Kieon Smith has went 22-of-36 for 480 yards and nine touchdowns. Smith’s favorite targets are Kellyn Winn (six receptions for 177 yards and three TDs) and Kameron Coleman.

Taylor said Smith is the “purest” athlete he’s seen at the QB position for TRM.

“Kieon is looking to run it and then if you take that away, he’ll throw it,” he said. “He does a great job of throwing the football. Whereas, in the past, they came out off their counter fake and they were looking to throw the football. It certainly presents a whole other set of problems from a defensive stand point.”

Defensively, TRM has almost all of its players returning from last year’s team.

Taylor said the best thing about football for a game like this is what happens for 48 minutes.

“Our kids are going to be fired up,” he said. “For them and us, there’s really no pressure. It’s just a matter of pride. You’ve got two teams fighting to stake claim to being No. 1.”

Kick off tonight in Brewton is at 7.

How exciting is this week in football?

On a November night last year, I found myself driving down the road that runs parallel to Straughn’s softball, baseball... read more