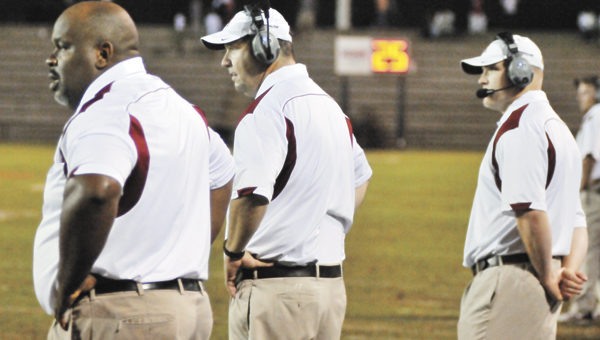 All season, Andalusia has been a second-half football team.

It didn’t show it last night as top-ranked UMS-Wright outscored AHS 14-0 in the final 24 minutes and ran away with a 29-8 victory on Friday night to win the Class 4A, Region 1 championship.

“He came up to me right before the end of the game and that’s what a leader does. He said, coach this is disappointing because we’ve been a second-half team all year,” Seymore said. “It’s very disappointing. The biggest thing — (UMS-Wright) didn’t do anything we didn’t work on. That’s the one thing that concerns me more than anything. As far as offense and defense, that’s exactly what we worked on — the same exact plays, the same exact schemes.

For UMS (7-1, 6-0) it all started with senior quarterback Gunner Roach and junior running back Troy Dixon.

Andalusia couldn’t get anything going in the first half, only putting up 43 yards on offense compared to UMS-Wright’s 203.

However, AHS responded after trailing 15-0 with 6:33 to go for its only TD of the night.

Andalusia Trevor Parker ran it in from 3 yards and senior quarterback Michael McCalman connected with Jud Rogers for the 2-point conversion to cut the lead to 15-8, which gave the home-town Bulldogs some much-needed life.

UMS went ahead 22-8 with 1:40 in the third quarter on a Roach 21-yard pass to Jones, and scored its second TD on a 43-yard scamper from Dixon with 1:31 left in the fourth to put the game away indefinitely at 29-8 after a successful PAT.

Terry Curtis, UMS-Wright’s head football coach, said the effort in the second half was a lot better than in the first half.

“Andalusia’s got a tough football team,” Curtis said. “We fought and they fought. I was proud of the guys in the second half. We just kept pounding and kept pounding, and some things happened. We made some big plays when we needed to in the passing game. I thought Gunner played real well, which was probably the difference in the game.”

Jones caught his first touchdown pass of the night on UMS-Wright’s first offensive series in the first quarter on a third-down-and-six play.

Roach found Jones on the left slot, and the wide receiver took it the rest of the way to hit pay dirt for the score with 6:37 on the clock.

Early in the second quarter, UMS went ahead by 15 on a 11-yard scamper by Dixon to give the junior his first score of the night. With a successful hurry-up 2-point conversion play, UMS took its big lead.

UMS-Wright’s third-down conversions early and late in the game hurt Andalusia, who was trying to get its defense off the field, Seymore said.

“They got it three of four times on us,” the Andalusia coach said. “It’s those little things, but we’ll get it right. I hope our kids show a little heart and a little resolve and bounce back and get another win.”

With this loss, sixth-ranked Andalusia falls to 7-1 overall, and 5-1 in the region going into next week’s home game against Escambia County.