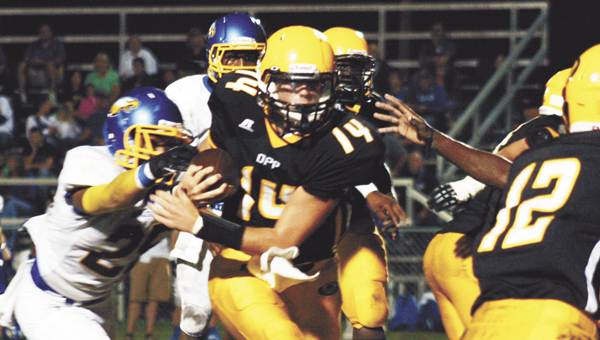 Trailing by three points late in the game, Michael Williams recovered an onside kick for W.S. Neal on the Opp 44-yard line as the Eagles tried to derail the Bobcats securing a berth in the Class 3A playoffs with a win.

But the ensuing Eagles’ drive came up short on fourth down when Opp’s Derek Savage broke up a pass in the corner of the end zone.

With the big stop, the Bobcats held on to win 27-24 and secured a spot in the postseason for the first time since 2011.

Opp head coach Jack Whigham said he couldn’t have asked any more of his players.

The Bobcats put the game away with a first down on fourth and inches inside their own territory with just over a minute to go in the game.

Whigham said the original call was to punt, but his players’ belief in themselves convinced him to change the play.

“We’re down there on fourth and one and the players are all saying, ‘we’ll get this,’” Whigham said. “Sometimes we as coaches don’t listen to our players enough.”

Opp fought the entire 48 minutes in an offensive shootout with Neal to earn Friday’s region win.

The Eagles struck first early in the game off a touchdown run from Quenton Samuel, but a missed 2-point conversion left them leading only, 6-0.

Opp answered on its next drive, finding the end zone on a 28-yard touchdown pass from Ethan Davis to Ta Bonam to take a 7-6 lead with 6:28 still remaining in the first quarter.

Neal also had an answer for the Opp offense. The Eagles drove down the field on their next drive with Samuel punching the ball in on the ground, but a second missed conversion left Neal leading Opp, 12-7.

The first-quarter back-and-forth game continued as Opp put together their own drive.

Orlando Lacey busted free for a long run before being brought down at the Neal 25-yard line.

One play later, Davis found Justin Adkins in the end zone for a 25-yard touchdown pass, giving Opp a 14-12 lead.

The Bobcats were forced to punt on their next possession, but a nearly perfect kick pinned W.S. Neal at their own 9-yard line to begin the second quarter.

Samuel made quick work of the bad field position, breaking free for a 63-yard run before Adkins brought him down at Opp’s 28-yard line. Despite the drive, the Eagles could not capitalize and turned the ball over on downs at the Bobcat 31.

Opp used the momentum shift to widen the scoring gap on their next possession.

Ty White broke free for a 49-yard scamper down to Neal’s 20-yard line.

Two plays later, Onterrio Jones found the end zone from a yard out, giving Opp the 21-12 advantage with 4:24 to play in the first half.

Prior to the halftime break, the Eagles pulled within three points of the Bobcats’ lead as Samuel found Williams for a 60-yard touchdown pass. The Eagles trailed 21-18 at the half.

The Bobcats converted on fourth and one on their first drive of the second half, and Bonham found the end zone again on a 50-yard touchdown run.

Neal was able to block the Bobcats’ extra-point attempt and Opp led 27-18 early in the third quarter.

Neal’s offense had problems getting started in the second half. On their first possession, Adkins picked off a pass from Samuel, giving the Bobcats the ball at their own 9-yard line.

Opp (5-3, 4-2) was not able to capitalize on the turnover and Neal fond pay dirt once more on their next drive. The Eagles put together a drive, capping it off with a four-yard touchdown run from Samuel.

The score pulled the Eagles back within three, but Opp’s late-game defense proved to be the difference.

“Neal’s a great team,” Whigham said. “We knew it was going to go down to the wire. We didn’t have any turnovers. Our defense played great. They put some points on us, but when they had to stop them, they stopped them.”

Whigham said he’s proud of his team and excited to have clinched a playoff berth, but said the Bobcats will have to shift focus to a tough match up next week at Straughn.

“We’re going to enjoy this one until about Monday morning and then we have to get ready for Straughn,” he said. “They’re a big rival.”