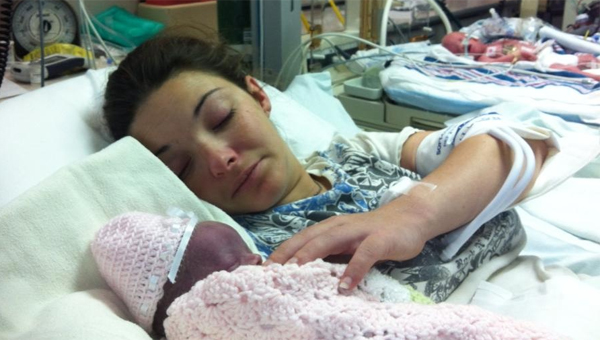 Noel Carpenter got to spend only a few moments with her twin newborns, Skylar Rae and Scarlet Mae, before they passed away earlier this week after complications with the pregnancy.

Devastation – that’s the only word that can describe what a young Opp couple is dealing with after their twin girls died within hours of each other earlier this week.

And now the public is being asked to help with the financial burden of paying for medical bills for the twins’ mother, Noel Carpenter.

“Yesterday, my friend Noel gave birth to twins,” family friend Tommie Norris said Tuesday. “Sadly, one of the twins went to be with the Lord at birth and was later joined by her sister shortly before midnight. (Noel’s) husband, Hank, is active military and is on his way home, but with this shutdown and her hospital stay, this is not just emotionally, but financially devastating. We are asking our local church members, friends, or anyone who would like to help this family through their time of grief, to reach into their hearts and help.”

Norris said he has set up an account in Noel and Hank Carpenter’s name at Wells Fargo to help the family, and anyone interested in donating may do so at any Covington County branch of the bank.

Sheila Quiney, the twins’ grandmother, said her son, Army Sgt. William “Hank” Carpenter, was on active duty in Afghanistan when the girls were born and has been trying to make his way home since Monday.

“We’re all devastated right now,” Quinley said Thursday. “My son is on his way home from Afghanistan. He had a 17-hour delay in Germany and he has flown into New York. It will probably be tomorrow before he gets in.”

Quinley said Noel had been battling problems with her pregnancy for some time.

“She has been having problem throughout the pregnancy,” she said. “ The girls had twin-to-twin transfusion syndrome, which means they shared the same placenta and umbilical cord. Both babies had kidney problems and one had heart problems.”

Quinley said doctors told the family that were they to deliver the twins two weeks ago, the girls would have a 95 percent survival rate, but wanted to allow more time for the babies to develop.

Monday, Noel delivered the girls – one stillborn and one facing brain damage. Quinley said the second girl passed away shortly before midnight on Monday.

“Noel knew things weren’t right before she gave birth,” Quinley said. “She said ‘something is wrong.’”

Quniley said, in the hours following the delivery, Noel was faced with the impossible task of deciding whether or not to terminate life support measures for her second child, all without the presence of her husband, who was still in the air on a flight back to the U.S.

“She didn’t want to have to make that choice without her husband,” Quinley said. “She wanted to wait until she could talk to him.”

Quinley said it quickly became apparent that Noel did not have that option.

“The baby was suffering and if her heart stopped they would have had to do CPR,” she said. “About 10:30 or 11 p.m. she decided to go ahead and take her off.”

Quinley said Noel did get a few moments of time to soothe her daughter before she passed away.

“(The baby) opened her eyes and she was looking at her mama,” she said. “She lasted probably 45 minutes to an hour. (Noel) had to tell Hank when he landed in Germany.”

In the wake of the tragic events of this week, Noel herself said she is thankful for the outpour of support from the community.

“Mr. Tommie Norris and Mr. David Lubert pretty much took it upon themselves and they’ve taken care of everything for me,” she said. “They’re amazing people.”

Noel said Southside Baptist Church in Opp has taken care of all of the funeral costs for her twin girls, Scarlet Mae and Skylar Rae. She said funeral service information will be available in the coming days.

Noel said she is waiting for her husband’s return home before finalizing funeral plans. The couple also has a three-year-old son.

Norris said any help provided by the community, no matter how small, will make a big difference for the family.

“Please keep them in your prayers and remember nothing is too big for this community if we stand together,” he said.

The city of Opp has begun work on a new pool that will replace the former veteran’s pool and Mayor... read more