Promise you won’t choke on this soup 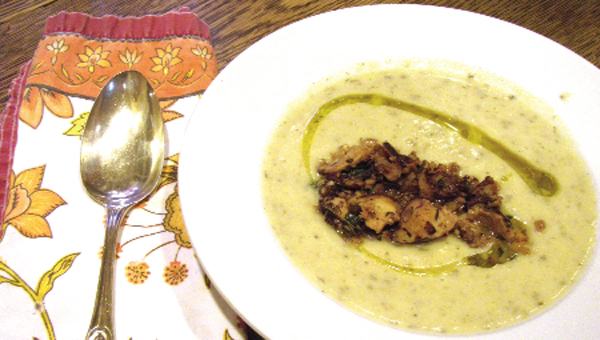 Mushrooms and nuts in a soup? You’ve got to try it.

My husband has been digging Jerusalem artichokes.  It is a little early in the season but he wanted to clean out an overgrown area. And I have been finding new ways to cook them instead of just boiling them and adding butter. They are ugly little creatures and are hard to clean, but they are a good vegetable with a misleading name.

Jerusalem artichokes are neither from Jerusalem nor artichokes. These tubers are actually a member of the sunflower family, and their name is probably a derivative of girasole, the Italian word for sunflower, or girasol, a Spanish word that means “follow the sun.” The association with sunflowers explains why they are sometimes marketed as sunchokes. In southern Louisiana they are known as tompinambours. By any name, they are intrepid growers that come back and flourish annually, to the point that some gardeners might wonder whether the towering plants will take over the garden.

A native of North America, Jerusalem artichokes were eaten by Native Americans, who both cultivated then and harvested the ones that grew wild along the eastern seaboard. Jerusalem artichokes were taken back to the Old World in the early 1600s by explorers, who suspected they would be a hit back home. They were. Even now, Jerusalem artichokes are more popular in most of Europe than they are in the United States, although there are pockets of great devotion in communities across the South. People praise this vegetable’s sweet, nutty crunch when raw and its earthy, silky smoothness when cooked.

Most cooks make a relish out of the artichokes or use them in a rémoulade. I made a rémoulade with the artichokes and celery root recently. It was very good with a piece of beef. I think one of the best ways to use the artichokes is in this soup combined with wild mushrooms and hazelnuts. This soup is perfect for a cool autumn evening and worth the effort for finding some of the ingredients.

Porcini oil or hazelnut oil, for drizzling (optional) (I had only olive oil.)

For the soup: Fill a medium bowl with cool water and add the vinegar. (This will keep the artichokes from darkening when cut.) Peel the artichokes only if the skins are blemished and cut them into thin slices, dropping them into the water as you go.

Melt the butter in a large saucepan or small soup pot over medium heat. When the butter stops foaming, stir in the leeks, celery, and a pinch of salt.  Cook, stirring often, until the vegetables are soft, about 8 minutes. Stir in 3 ½ cups of the stock and the salt and potatoes.

Drain and quickly rinse the artichokes, then add them to the pot. Add the bay leaf and thyme. Bring to a boil, reduce the heat, and simmer partially covered until the artichokes and potatoes are very soft, about 30 minutes. Discard the bay leaf. Purée in a blender (working in batches) and return to the pot, or purée the soup directly in the pot with an immersion blender. Stir in the half-and-half and Madeira. The soup should be very thick but not pasty, so add the rest of the stock or another splash of half-and-half if needed. Season with the pepper and more salt, if needed. Keep the soup warm over low heat, stirring occasionally.

For the mushrooms: Melt the butter in a skillet over medium-high heat. When the butter stops foaming, add the mushrooms, making sure they are in a single layer in the skillet; cook them in batches if necessary. Stir the mushrooms briskly to coat them with butter. Sauté stirring or shaking the skillet occasionally, until the mushrooms are browned and barely tender, about 4 minutes. Add the artichokes and hazelnuts and cook, stirring, for 1 minute. Add the Madeira and cook, stirring until the liquid cooks away. Remove the skillet from the heat and stir in the nutmeg, thyme, and parsley. Season with a tiny bit of salt and pepper.

To serve, ladle the soup into serving bowls. (Shallow soup plates work well.) Spoon a portion of the mushroom mixture into the center of each serving. Drizzle a few drops of the oil around the edge of the soup, if using, and serve straightaway.
Although this soup can be a hearty meal, it is fine enough to be a soup course at a nice dinner party.

Tammy Sanford shows off her new kitchen in a home built by Habitat for Humanity. Tammy and Andy Sanford are... read more