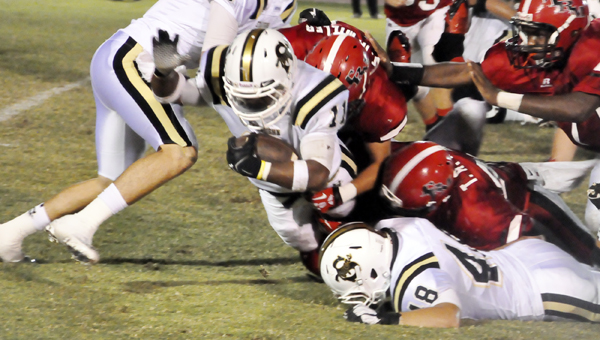 It was a top five battle between fifth-ranked Straughn and third-ranked T.R. Miller for the Class 3A, Region 1 championship.

But while a battle was expected, it was not seen as TRM cruised its way to a 42-7 win over Straughn

TRM led Straughn 7-0 after the first quarter before erupting with 22 points in the second to take a 29-0 lead at the half.

In the third quarter, T.R. Miller outscored Straughn 13-0 to increase their lead to 42-0 heading into the final quarter of play.

In the fourth, Straughn tacked on seven points after Daryl George broke a 46-yard run for the lone touchdown of the night.

While Riggs and Jackson were both pleased with the results from Friday night’s win, Straughn head coach Trent Taylor was not‑but put the responsibility on himself.

“T.R. Miller just really took us behind the woodshed tonight,” he said. “I really don’t know if there is much more you can say about it. I just really didn’t have our kids ready to play and obviously T.R. Miller was.”

“Straughn has an outstanding team and that is probably the best we have played in 10 years,” T.R. Miller head coach Jamie Riggs said. “We were ready to play tonight and from the get-go we were able to block them and get points on the board. I think the whole key to the game was just our defense. We got turnovers in the first half and we didn’t give up a big play. Straughn had been very explosive. I was really tickled with our defense.”

T.R. Miller was led by their defense and running back Dominique Jackson in the win.

TRM picked off three of Straughn quarterback Rollin Kinsaul’s passes and got a fumble later in the game.

While the defense was getting the turnovers, Jackson burned Straughn for 270 yards on 18 carries and three scores. Jackson scored on runs of 93, 3 and 59 yards, all on his birthday.

“I just think coach Riggs had them ready to play and we were not, and that falls on me,” Taylor said. “We have got to try and rebound next week and get one at home.”

TRM racked up 466 total yards of offense in the win and had 17 first downs.

Jackson had 196 yards rushing in the first half alone on 12 carries.

At the half for Straughn, the Tigers had 96 total yards with 81 rushing and 15 passing and four first downs. T.R. Miller had two of their three interceptions in the first half and scored on both.

Overall for the game, T.R. Miller had 450 yards rushing on 50 carries and 16 yards passing. Straughn had 264 total yards of offense with 213 coming on the ground on 31 carries and 51 coming in the air.

“First off, we knew it was two great teams that was going to play each other,” Baxter said. “Straughn is a great football team. Their quarterback, No. 5 Rollin Kinsaul, is a great football player. We knew going into the game he was going to be tough to defend so we focused on them making them beat us by snapping it over and over, and not giving up big plays.”

For Straughn, Kinsaul led with 72 yards on 10 carries while George had 62 yards on six carries and the 46-yard touchdown.

Kinsaul was 5-for-14 passing for 51 yards and had three interceptions. All Kinsaul’s passes were to five different receivers with Brice Scott leading the way with 17 yards.

The win for Opp made them the fourth seed in the region while W.S. Neal was eliminated from playoff contention.

Both games are set for 7 p.m. kickoffs.

Jaron and Chelsea Wood of Andalusia announce the birth of their son, Jesse DoyleLynn Wood. He was born on Oct.... read more