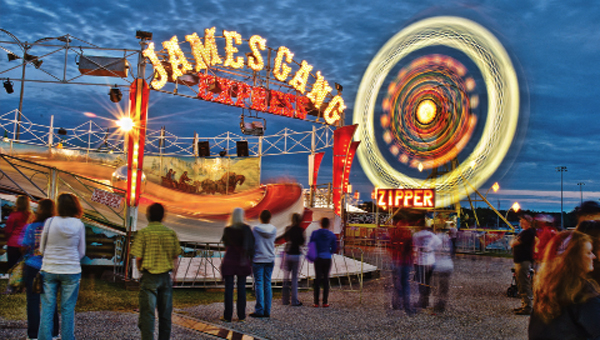 The lights from this year’s Covington County Fair drew many to their promise of fun, and made for a beautiful mid-October scene in Andalusia.

For the second year in a row, an estimated 14,000 people attended the Kiwanis Covington County Fair.

Wayne Bennett, fair chairman, said Monday that the turnout was “the two best years in at least a decade.”

“And it’s been the best since we went from a 10-day event to a seven-day event,” he said. “The club was able to gross more than $100,000 in revenue, so that means that we will have some $45,000 available to give to community and civic groups that support children’s programs and activities.”

Bennett said a special thanks goes to the City of Andalusia and its employees, as well as the James Gang of Andalusia.

“Friday night was our best night with 3,400 in attendance,” he said. “We had 790 on Sun day afternoon, too. That wasn’t a surprise since it was the prettiest day of the week.”

Bennett said that while the club still has “two or three days” of clean-up work ahead, this year’s fair was a great success.

“The work doesn’t end when the gates close,” he said. “We had a decent number of entries in terms of horticulture, livestock, photography and artwork. We escaped the rain, so all in all, we had a good fair. We couldn’t have asked for better, and next year, we’ll have the 52nd fair.”
The fair began Monday and concluded Sunday.