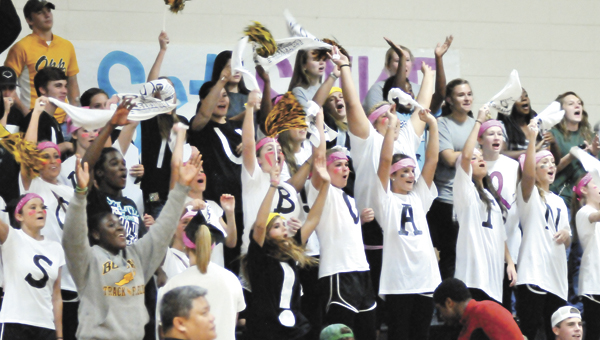 A good portion of the Opp High School student body showed out for the Lady Bobcats area tournament championship Monday night. After every point, the crowd would go nuts. | Andrew Garner/Star-News

Sundays are usually designated as a day of rest.

Opp threw that idea out the window and worked on its blocking and serve receive game for two hours.

OHS volleyball coach Christie Spurlin said the girls worked hard all week for their match against the Lady Tigers.

“We knew what we had to do,” Spurlin said. “Straughn had a couple of girls that we knew we had to work on, in addition to working on blocking and serve receive.

It paid off in a big way because with the victory, Opp advances to play in the South Super Regional Volleyball Tournament, which starts on Friday at Montgomery’s Cramton Bowl. The ninth-ranked Lady Bobcats (24-5) face Thorsby at 9 a.m. on Court No. 4. SHS, who beat Excel 3-1 in the first match of the area tournament, plays 10th-ranked Trinity at 11:30 a.m., also on Court No. 4.

Getting to the playoffs was a goal for SHS since the start of the season, Lady Tigers coach Daniel Rodgers said.

“We played hard against Opp,” Rodgers said. “I feel like we were looking past Excel a little bit, and we can’t afford to look past anybody. The girls did respond against Opp pretty well.

“I thought we played hard,” he said. “The score doesn’t indicate how well the ball game was on both sides. They played great. (Opp) deserved to win it. I’m extremely proud of my girls.”

Opp’s cheerleaders and the pep club pulled out all the stops for the area championship match. A large portion of the student body filled the stands behind the Lady Bobcats’ bench and let the world know of their support for their team.

Spurlin said the fans were “awesome.”

“It was a packed house and we’ve never had that before for a volleyball game,” she said. “I’m very thankful for the cheerleaders, and the pep club and all of the student body that showed up today.”

On every point OHS scored, the crowd would go into a frenzy.

SHS and OHS were neck and neck through the first 15 points of the first set, but an 8-0 run by the Lady Bobcats put their lead to 22-17. Straughn answered with a short rally and both went back and forth until the final point.

In the second set, Straughn got down 5-9 and would never gain a lead. The Lady Tigers would get as close as one point, but OHS pulled away with strong outside and middle hitting from Laiken Free and Olivia Bradley. Caiden Harrell got a nice cross-court kill that put the Lady Bobcats ahead for good at 20-16 later in the set.

Between games, the Lady Tigers regrouped and came out firing in the third set as they took an early 5-2 lead.

When the scoreboard later read 11-11, the referees stopped play to settle what was then a snafu on the scorer’s table.

Spurlin said the scoreboard keeper pressed the point button too many times to give one team a bigger lead than needed.

After a few minutes, the Lady Tigers came out ahead 12-10, but Opp was on serve.

Spurlin said the girls came through in the end.

“I just sometimes have to sit back and they know — they’re like don’t call a timeout coach Spurlin. They never want me to call a timeout because it interferes with their momentum. I just tried to hold back and have faith in them.”

OHS had match point at 24-17, and Harrell went up to kill the ball for the match, but the Lady Tigers got the dig and kept the play alive, from which they received a point.

The Lady Tigers took a timeout and then went ahead 23-21, and won the set on a Jacie Williamson kill.

SHS took a 2-1 lead and went back and forth early on with the Lady Panthers at the start of the second set.

Rodgers said it was frustrating to watch the girls play a lot less than they are capable.

“It wasan’t like the effort wasn’t there. It’s just — the focus wasn’t there,” he said. “I thought I may have done some things that might have broke their focus during the match. We just had a hard time getting it back.

“A lot of the frustration was from me, but a lot of it too was I thought that we played hard, but we were just kind of looking beyond,” he said.

Straughn trailed in the early going of the fourth set and with Williamson’s blocks for points, along with good serving from Angel Carter and others, the Lady Tigers took a 17-14 lead all the way to the bank, outscoring the Lady Panthers 8-4 for the match win.

Rodgers said the girls will play hard on Friday against Trinity.

“We’re just going to work on us,” he said. “I don’t know what their record is, but they sound like they’re a school that plays volleyball. We’re just going to go over there and have fun. We’re in the playoffs. That was a goal for the season. It’s a one-game season from here on out.”