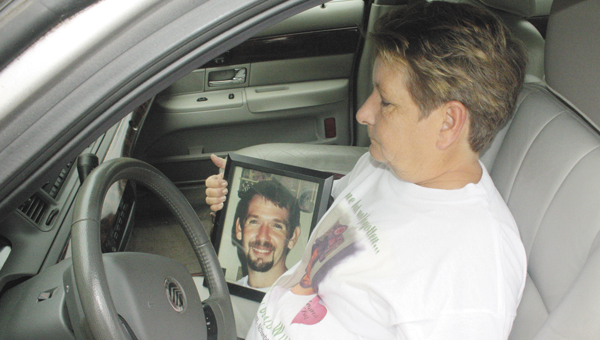 For 7 years, Faulkner has grieved for her son, but she has never given up the notion of finding justice for his death

Drowsy driving is the same as drunk driving – or at least that’s the opinion of an Andalusia mother who lost her son in fatal accident nearly seven years ago. And now, she is looking to change the law and make it a crime to cause an accident after being awake for 24 consecutive hours or more.

Wendall G. Williams, 28, was a passenger in the car, and by accounts, riding with a man who had been awake between 22 to 30 hours before he fell asleep at the wheel that November morning in 2006. The driver was not charged nor given any traffic citations.

Since that day, Shelia Faulker has cried, pleaded and screamed to find justice for her son.

She may have just succeeded.

Drowsy driving is implicated in 100,000 car crashes per year, which leaving 71,000 people injured and 1,500 dead, according to the National Highway Traffic Safety Administration. New research on the need for adequate sleep in maintaining good health, coupled with the negative impacts of sleep deprivation, are coming to the attention of policymakers, and legislation is beginning to be crafted regarding the role of drowsy driving in traffic accidents.

In Arkansas, “drowsy drivers” who cause a fatal accident face up to a $25,000 fine and a year in jail. Under that law, drivers are guilty of “fatigued driving,” classified as negligible homicide, if they have been awake for 24 consecutive hours and cause a fatal accident. A similar law was passed in New Jersey.

Other states such as Texas, Florida, California and Pennsylvania, are attacking the problem through public education campaigns to educate drivers on ways to avoid fatigued driving.

There is no law in Alabama governing “drowsy driving,” but, because of Faulkner, that may soon change.

It would’ve been different, Faulkner said, had the accident occurred under normal circumstances. But it didn’t, she said.

“Wendall and his friend had gone out to a club in Opp the night before,” she said. “The driver wasn’t drunk, but he’d been up 22 hours. They were coming up the Martin Luther King Jr., what I call Speedway, when the car ran off the road, went six feet up a railroad crossing pole and landed on its top.

“My son did everything right,” she said. “He was wearing his seat belt, but they said he died from blunt force trauma to the head. The driver ended up being fine.”

When Faulkner didn’t find resolution from the legal world – her attempts to get criminal charges filed against the driver and an attempt to sue the driver and the nightclub for liability all failed – she decided on a new route.

“The law didn’t work for me, so I decided, after doing some research, to change the law so it would work for other families in the future,” she said. “I love my son that much. His death was really hard on me and my family – all that anger and hostility. I don’t want that to happen to anyone else, and the fact is (the driver) had been up so long that he had no business being behind the wheel.

“It would be different if they’d been going to store to get a coke, or to the grocery store to get dinner, to a gas station to put gas in the car, but not coming from a club,” Faulkner said of the crash. “I believe then it would have been an accident, and I wouldn’t feel as hard as I do right now.”

“I said I wasn’t going to stop until someone knew how I felt,” Faulkner said.

A family member who travels for work made a comment one day about seeing signs warning against drowsy driving.

“And that’s where it started,” she said.

So one bright day in September, she got into her car and drove to Montgomery to Sen. Arthur Orr’s office with a mission to share her story. Armed with photos of the crash site and a letter describing her plight and her desire to see Alabama pass legislation prohibiting drowsy driving, Faulkner said she left the information for review. Days later, she got the call she’d been waiting seven years for – finally, someone who listened.

“I’d said to myself, I don’t know if anyone will listen to me, but I had to try,” she said of talking with Orr. “When I got that call, it was like, for the first time, I could almost feel a little peace. I feel thankful that someone listened. But in the end, I’ll feel a lot more peace when I go before the governor and he signs this bill into law.”

Sen. Orr’s office said Tuesday that a draft of the bill wasn’t available from the legislative reference service; however, it is expected to be one similar to what Arkansas passed, Faulkner said.

The lights from this year’s Covington County Fair drew many to their promise of fun, and made for a beautiful... read more