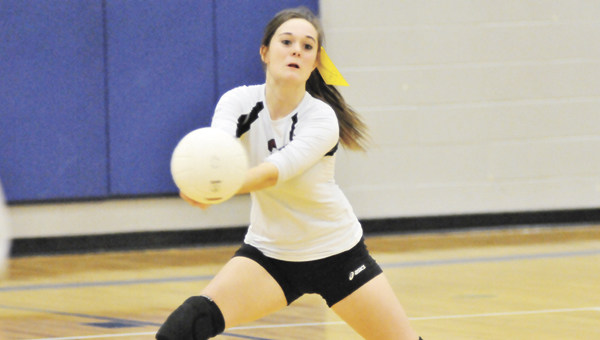 Andalusia’s Stephanie Watts tries for the ball Tuesday at the Class 4A, Area 2 tournament in Monroeville. | Andrew Garner/Star-News

Five local volleyball teams will serve it up in Montgomery for the South Super Regional Tournament at the Multiplex at the Cramton Bowl in Montgomery.

The tournament, which will take place on Friday and Saturday, brings together teams from all across the south who are in Areas 1-8 in all six classifications.

The format of the tournament is single elimination and each match is a best 3-out-of-5 games. Area winners will play a runner up from another area in the first round of the bracket. Second round play will continue on Saturday morning, starting at 9.

In order for teams to advance to the state tournament, they must win the first two matches (one tomorrow and the first match Saturday) to finish in the top four of their respective classifications. Consolation matches will be played to determine third and fourth place teams.

For those who are interested in attending the tournament, admission is $8 per day.

Opp will kick off local play tomorrow morning at 9 against Thorsby on court No. 4 in the first round of the Class 3A tournament. Straughn plays Trinity Presbyterian later on at 11:30 a.m. on the same court.

Andalusia will be the last local team to play on Friday, as the Lady Bulldogs tip off against Dadeville at 5:30 p.m. on court No. 4.