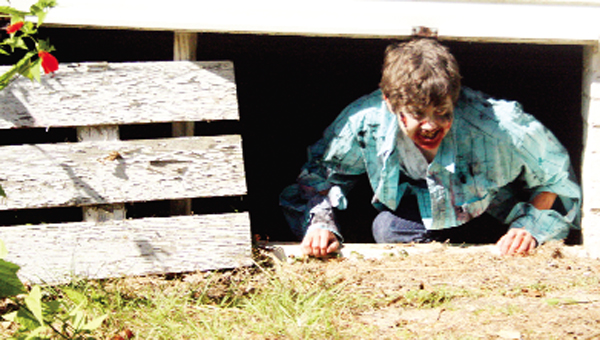 Red Level High School junior Kayla Hinson emerges from under a home the drama club has transformed into a haunted house for their annual Fright Night event.

Students in the drama club at Red Level High School are embracing the Halloween spirit, and preparing to offer locals a good old fashioned scare this week.

Drama club sponsor Jennifer Withrow said her students will be holding the second annual Fright Night haunted house today through Saturday at a home adjacent to the school.

“The haunted house will be open Thursday through Saturday,” she said. “It is $5 for ages 10 and up. We will also be holding our glow ride, which is not scary, and will be open to ages 10 and under. It is $3 and will include a glow bracelet and a hay ride.”

Withrow said all of the proceeds form the events will go to benefit the drama club.

“We want to refurbish our stage, and we need some new lights and equipment,” she said.

Concessions, including chili and chilidogs, will also be available.

Students involved in this year’s haunted house said they expect to provide visitors with a frightfully good time.

“The house itself is just really creepy,” said Will Shay, vice president of the drama club.

Shay said he initially became involved in the club through his love of the theater.

RLHS junior Kayla Hinson and freshman Ben Jackson were also preparing for this week’s haunted house Wednesday, and said being part of the drama club has been an excellent experience.

Withrow said the club’s next big project will be a production of “CSI: Neverland,” a satirical comedy they plan to debut on stage in February.

This year’s Fright Night production will begin each night at 7 p.m. The house is located at 58551 Barrow Road.

Members of the Florala marching band compete at LBH. The weather was dreary, but the annual Little Big Horn marching... read more