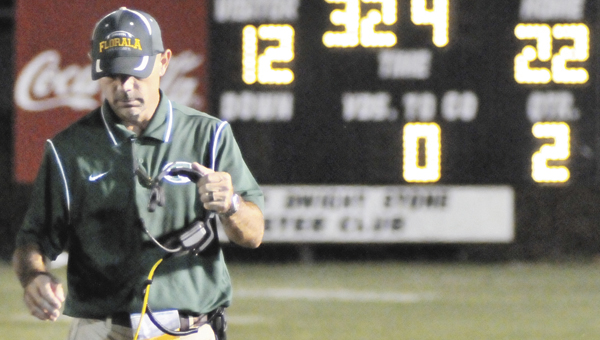 Florala head football coach Bubba Nall reminded senior players of one thing this week — that they are guaranteed two more games this season.

The Wildcats, unfortunately, lost a shot at the postseason last week after falling 52-30 to McKenzie in a well-fought and tough game.

This week, Florala (4-4, 2-4 in Class 1A, Region 2) visits Georgiana for its final region contest of the year, and Nall said the Panthers are athletic.

“It’s hard to believe that they have the best quarterback (Alen Smith, junior) in the region,” Nall said. “He’s a good runner and throws the football. He’ll be hard for us to tackle.”

Nall said GHS head football coach Ezell Powell has done a good job over there in his first year.

“They don’t look like the same Georgiana team,” he said.

When asked how different they look, Nall said the program has more kids playing and they’re a bit older.

“They play harder up front – they look big to me on film,” he said. “Obviously, their quarterback is a tremendous athlete. He’s special.”

Nall said if the Wildcats can win these next two weeks, then they have a lot to be proud of.

“For my seniors, I try to tell them you’re guaranteed two more games,” he said. “To have two winning seasons at Florala, and for them to say that they won both homecoming games — that’s something they can hold their heads up high for in the future.”

The City of Andalusia released its All-Star rosters for youth soccer on Thursday. All soccer teams will play in a... read more